I took BITTER MOON as the name for the fourth book in the HUNTRESS MOON series - all six books currently on sale 99c each - and you can add RC Bray’s award-winning audio for just $3.99). 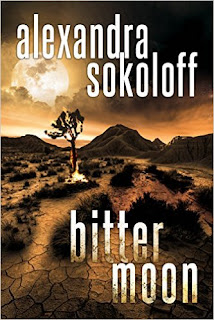 As you might guess by the cover, this book takes Roarke deep into the desert, following a sixteen year old cold case that may be the key to Cara's bloody history. It's probably the most mystical of the books, unfolding on a dual time line, with the present and past intersecting as Roarke and fourteen-year old Cara both race to stop a sadistic serial predator.

There are new characters I think you'll love as much as I do, and you'll find out much more about Cara's past. And there are new settings! The California desert is possibly my favorite place on the planet, and for this one I'll be taking you to the magical Coachella Valley (yes, home to the Coachella music festival) and the wine country of Temecula.

I believe BITTER MOON is the best of the series, and a lot of reviewers agree.

Instead of trying to describe why on my own, I’ll leave it to Nancy Bilyeau, reviewing for ITW’s The Big Thrill:

In the fourth novel in the series, the action is suspenseful, the atmosphere eerie, the characters nuanced.

But BITTER MOON accomplishes a truly remarkable feat: It is both a prequel that explores the harrowing history and psychological development of Cara Lindstrom as it unfolded 16 years ago in a town in the California desert, and a present day narrative that follows FBI agent Matthew Roarke as he investigates her history—and finds himself on the trail of long-ago sadistic predator who wa never caught.

With a plot that swivels back and forth between alternating points of view, the two characters are literally in the same place but sixteen years apart in time, their arcs drawing closer and closer to a tense finish.

Sokoloff makes further choices that push the novel into fresh territory.  What puts Roarke in more danger is that he is not on the job as an FBI agent during BITTER MOON. At the end of the preceding novel, he was shaken and disturbed by what happened to Cara. Finding answers takes over his life; it’s personal. “I wanted him to stop being an agent,” Sokoloff says. “He was really hit hard. ”

As for the inspiration for Cara Lindstrom, she came from several sources. One influence was the atmosphere in California surrounding the murders committed by the Zodiac Killer, a serial killer who was never caught. Another is the true story Sokoloff read about a nine-year-old girl who was at a friend’s house the night a rapist/murderer struck, and the girl herself was attacked and left for dead.

“This is a girl who has seen pure evil,” Sokoloff says.

* I will add that the plot of BITTER MOON, and Cara’s entire back story, has much to do with another horrific California crime: the abduction, rape, and burning alive of a young high school girl.)

Another feature of the series is the melding of careful research into crime forensics with plot developments that could possibly be supernatural. On one page, a reader finds discussion of the latest technology in evidence rape kits; on another, there’s a suggestion of a shamanic vision.

Posted by Alexandra Sokoloff at 7:40 AM