Writing five minutes a day equals a book in a year 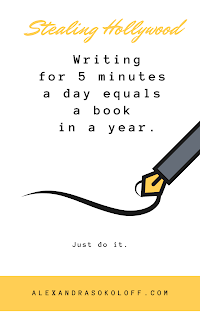 2020 was a hell of a year. I know I’m not the only one to be glad for a chance to take out the trash and start fresh.

I actually got a lot done last year. I launched an online writing class. I had Covid in the spring and recovered, although it took a while. I did everything I could do from a distance to help save democracy.

Five minutes a day for a year equals a book.

Five minutes of writing a day for a year equals a book.

I wrote my first novel, The Harrowing, by writing just five minutes per day. My day job was screenwriting, at the time, and yes, it was a writing job, but it had turned into the day job from hell. But fury is a wonderful motivator and at the end of the day, every day, I was so pissed off at the producers I was working for that I would make myself write five minutes a day on the novel EVERY NIGHT, just out of spite.

It’s just like the first five minutes of exercise, something I learned a long time ago. As long as I can drag myself to class (or now, to the living room) and endure that first five minutes of the workout, and I give myself permission to leave after five minutes if I want to, I will generally do the whole class, and usually end up loving it. (There are these wonderful things called endorphins, you see, and they kick in after a certain amount of exposure to pain...)

The trick to writing, and exercise, is—it’s STARTING that’s hard. I have been writing professionally for . . . well, never mind how many years. But even after all those many years—every single day, I have to trick myself into writing. I will do anything—scrub toilets, clean the cat box, do my taxes, do my mother’s taxes—rather than sit down to write. It’s absurd. I mean, what’s so hard about writing, besides everything? But I know this just like I know it about exercise. If you can just start, and commit to just that five minutes, those five minutes will turn into ten, and those ten minutes will turn into pages, and one page a day for a year is a book.

Posted by Alexandra Sokoloff at 1:55 AM