Put your craft on autopilot: A Star is Born setpieces

We all love these lazy days, and we deserve a break, right? Summer is for vacations, and spa days, and - well, let’s face it - no one feels much like writing, do they? I know I’d much rather be bingeing Big Little Lies (the jury’s still out on Stranger Things 3…)

But why not do both? Be lazy and enjoy summer AND get some writing craft work in at the same time?

As some of you know, I’ve written several books on story structure and teach a popular story structure workshop when I have time - or when the location is so great that I can’t resist. Like this one on a cruise ship to the Caribbean in November, for example.

Writers usually buy the writing workbooks and take my workshops because they’re looking for specific help with their specific books. And that’s great. But I also try to emphasize that everyone can be practicing the techniques of the Three-Act, Eight-Sequence Structure and becoming a better storyteller pretty much all the time, practically by osmosis.

We went to a looooong party over the 4th of July weekend, and nobody felt much like doing anything on Sunday, so Craig and the cat and I ended up finally watching the latest A Star is Born.

I talk a lot about story patterns (WHAT KIND OF STORY IS IT?) in my workshops, and one of the first things I do is encourage my students to identify the kind of story they’re writing. Because whatever story pattern you are writing (or patterns - there’s often more than one at work!), it’s always astonishingly useful to watch three or four movies of this story type in a row, to understand the specific structure of these stories and what elements we, the audience, keep coming back to see.

So that you can make sure to be hitting those elements in your own story, and even giving us the new or deeper take that will make your story a classic. Right?

We have many Hollywood examples of the “Star is Born” story. All four of the movies with that title (1937, 1954, 1976, 2018). Also What Price Hollywood (arguably the very first in the line), Funny Girl, and the TV show The Marvelous Mrs. Maisel, which is an extraordinarily good, and successful, example of this story type.

I have to admit that I am particularly drawn to this story pattern because of the thematic deal with the devil aspect of it. A Star is Born never ends happily, does it? It’s a Hobson’s Choice - the heroine is always forced into a choice between fame and love. And the implication of the story line is ALWAYS that the heroine achieves fame only by sacrificing love. Even worse, the story usually says, implicitly, that the love of her life has to die in order for her to achieve fame. Or maybe what it’s saying is that even if he loves her, a man would rather die than be eclipsed by a female star.

Hopefully Mrs. Maisel will be a little more modern about it - we’ll see!

So let’s say you have an idea for a Star is Born story of your own. If you watch three or four of these Star is Born stories for common elements, you can’t help but notice that there is a scene early on in each one of these movies/shows that you could call the “Star Power” scene:  a musical or acting tour de force that makes us understand that the heroine was born to do exactly this.

It’s unique in that the heroine doesn’t just expresses her DESIRE for fame (the classic musical I WANT song) - the scene specifically has to blow us away with the force of her talent in this climactic SETPIECE.

Funny Girl is a great example of making the Heroine's Desire concrete and visual. Musicals so often do this brilliantly, in song, staging and visuals. Early in the story, Barbra Streisand as Fanny Brice is fired from the chorus line of a vaudeville show because she's a terrible dancer, and, well, not exactly cover girl material. She tries to convince the producer to rehire her in a comic song ("I'm the Greatest Star") but gets thrown out of the theater anyway. Out in the alley, she makes a decision and storms back inside to try again, still singing - only to find the theater empty.  Then alone, out on stage, she has that moment that I'm sure every actor and singer and dancer in the history of the world has had - that moment of being alone on an empty stage with the entire vast history and awesome power of the theater around you. She is speechless, silenced 0 and then finishes the somg with a power and passion we haven't seen in her yet. We see, unequivocally, that she is a star.

And that turn gets her hired back.

I love that Star Power scene and most of the rest of the movie - it's a much more entertaining and thoughtful take on the Star is Born story than the actual A Star is Born Streisand starred in in 1976.

The 2018 A Star is Born nails the Star Power scene for damn sure with Lady Gaga’s stellar turn of “La Vie En Rose” in the drag club.

Mrs. Maisel’s drunken foray into standup comedy is a fantastic, non-musical variation on the scene. Yeah, that upper Eastside housewife has the goods.


And of course in George Cukor’s 1954 A Star is Born, the iconic Judy Garland rendition of “The Man That Got Away” is not just a famous scene, but one of the best-known scenes in film history.


You can do this kind of scene comparison for any story question/problem you have in your own story. Screen three movies in the genre you’re writing and let the scenes those filmmakers came up with inspire you to create your own classic scenes.

Isn’t that a goal for some lazy summer writing?

If you'd like to to see more of these story elements in action, I strongly recommend that you watch at least one and much better, three of the films I break down in the workbooks, following along with my notes.

I do full breakdowns of The Matrix, The Wizard of Oz,  Chinatown, Harry Potter and the Sorcerer's Stone, Romancing the Stone, Sense and Sensibility, Four Weddings and a Funeral, Sea of Love, and The Mist - and act breakdowns of You've Got Mail, Jaws, Silence of the Lambs, Raiders of the Lost Ark in Stealing Hollywood.

I do full breakdowns of The Proposal, Groundhog Day, Sense and Sensibility, Romancing the Stone, Leap Year, Notting Hill, Four Weddings and a Funeral, Sea of Love, While You Were Sleeping and New in Town in Writing Love. 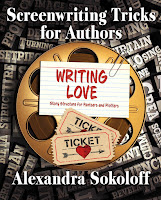 (This mailing list is NOT the same as the RSS feed of the blog - you must opt in to this list to receive the extras mailings.)

Posted by Alexandra Sokoloff at 5:10 AM

Email ThisBlogThis!Share to TwitterShare to FacebookShare to Pinterest
Labels: A Star is Born, Alexandra Sokoloff, Funny Girl, how to write a book, how to write a movie, Judy Garland, Lady Gaga, Screenwriting Tricks for Authors, setpiece scenes, Stealing Hollywood