So if you're not this far, just save this post for later. 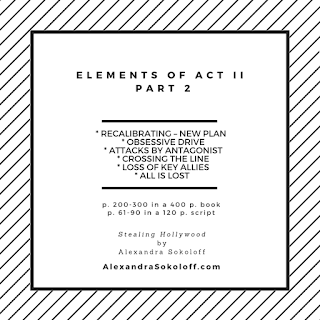 A few general things about Act II, Part 2. This is almost always the darkest quarter of the story. While in Act II, Part 1, the hero/ine is generally (but not always) winning, after the Midpoint, the hero/ine starts to lose, and lose big. And also lose very fast. In fact, this is the quarter that is most often shortened if you are writing a shorter book or movie, because it's not all that hard and doesn't take all that much time to pull the rug out from your protagonist.

Just knowing that basic, very general distinction between the two halves of Act Two can be very, very useful.

But getting more specific...

In a 2-hour movie this section starts at about 60 minutes, and ends at about 90 minutes.

Now, remember, at the end of Act II, part 1, there is a MIDPOINT CLIMAX, which I'll review briefly because it's so important.

In movies the midpoint is usually a big SETPIECE scene, where the filmmakers really show off their expertise with a special effects sequence (as in HOW TO TRAIN YOUR DRAGON and HARRY POTTER, 1), or a big action scene (JAWS), or in breathtaking psychological cat-and-mouse dialogue (in SILENCE OF THE LAMBS). It might be a sex scene or a comedy scene, or both in a romantic comedy. Whatever the Midpoint is, it is most likely going to be specific to the promise of the genre.

And I strongly encourage you as authors to pay as much attention to your midpoint as filmmakers do with theirs.

Act II, Part 2 will almost always have these elements:

* RECALIBRATING– after the shock or defeat of the game-changer in the midpoint, the hero/ine must REVAMP THE PLAN and try a NEW MODE OF ATTACK.

A good story will always be clear about the stakes. Characters often speak the stakes aloud.

How have the stakes changed? Do we have new hopes or fears about what the protagonist will do and what will happen to him or her?

Little actions by the hero/ine to get what s/he wants have not cut it, so the actions become bigger and usually more desperate.

Do we see a new level of commitment in the hero/ine?

How are the hero/ine’s actions becoming more desperate?

* It’s also worth noting that while the hero/ine is generally (but not always!) winning in Act II:1, s/he generally begins to lose in Act II:2. Often this is where everything starts to unravel and spiral out of control.

Do we see the hero/ine crossing the line and doing immoral things to get what s/he wants?

* LOSS OF KEY ALLIES (possibly because of the hero/ine’s obsessive actions, possibly through death or injury by the antagonist).

Do any allies walk out on the hero/ine or get killed or injured?

* A TICKING CLOCK (can happen anywhere in the story, or there may not be one.)

* THE LONG DARK NIGHT OF THE SOUL and/or VISIT TO DEATH (also known as: ALL IS LOST).

What is the All Is Lost scene?

* In a romance or romantic comedy, the All Is Lost moment is often a THE LOVER MAKES A STAND scene, where s/he tells the loved one – “Enough of this bullshit waffling, either commit to me or don’t, but if you don’t, I’m out of here.” This can be the hero/ine or the love interest making this stand.

* Often will be a final revelation before the end game: often the knowledge of who the opponent really is, that will propel the hero/ine into the FINAL BATTLE.

* Often will be another devastating loss, the ALL IS LOST scene. In a mythic structure or Chosen One story or mentor story this is almost ALWAYS where the mentor dies or is otherwise taken out of the action, so the hero/ine must go into the final battle alone.

* Answers the Central Question – and often the answer is “no” – so that the hero/ine again must come up with a whole new plan.

* Often is a SETPIECE.

Posted by Alexandra Sokoloff at 1:12 AM

Email ThisBlogThis!Share to TwitterShare to FacebookShare to Pinterest
Labels: #amwriting, #Junowrimo, #Nanowrimo, Act II, Alexandra Sokoloff, how to write a book, how to write a novel, Screenwriting Tricks for Authors, Stealing Hollywood