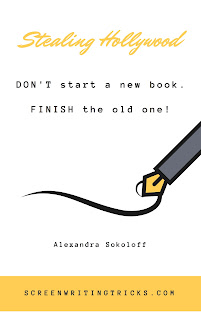 I know that some people have some crazy idea that you have to start a new project for Nanowrimo.

Nanowrimo has no rules except moving the needle forward on your writing.


If you're in the middle of a book, you DO NOT WANT to stop to run after a shiny new idea. That is a great way not to ever get published.


I recently did a Skype session with a writing group, and I started it as I always start a workshop, with these questions:

1.  The genre of your WIP (Work in Progress)

2.  The premise of your book - the story in one or two sentences.

3 .  A list of TEN books and films (at least five films) in your genre that are somewhat similar to your book structurally.

Just that bit of information on my audience or students helps me focus the session or class so that everyone gets the most out of our time together. And you know what I find over and over?

Very few people can tell me about their ONE book.
Because most of the participants have five, six, seven, even eight (I’m dying here…) book or story projects going at once.

Over the years I have been astonished at how many people in my workshops have multiple projects in various stages of completion. It's not astonishing at all that most of these people remain unpublished.

Because published authors are writers who suck it up and FINISH their books.

They COMMIT. They deal with the reality of what they have written instead of the fantasy of what they thought they were writing. They develop the Teflon skin that allows them to put their work out there to be criticized—and yes, rejected. Lots of rejection.

Some of these unfinished projects will never be good enough to be published. The unfortunate truth of writing is that you won't know that until you finish. But you have to become a writer who finishes what you start, even if you then have to throw a whole completed project away once in a while. That is part of the process of becoming a professional writer. You must figure out how to FINISH every book you write.

So here’s the takeaway.

DON’T write a new book. FINISH the old one.

I am pretty sure that what most aspiring authors need to be doing for Nanowrimo - or wherever you are in the year, is to FINISH an old book.

Part of that process is picking the right premise to begin with, which we'll get into soon. But another critical part of that process is ramming your head into a concrete wall (metaphorically speaking) until you're battered and bloody but you finally figure out how to make that particular book work. Some books are just harder than others, but you must demonstrate to the Universe that you are willing to do whatever it takes to make ANY book work. It's a trust thing. Your books must trust you to fully commit to them.

And that time is NEVER wasted, even if you never make money off that book. It is professional and more importantly - CREATIVE development.

I have a book hidden in my files in the Cloud that I could be making quite a lot of money on if I just self-published it, or even had my agent go for a traditional publishing deal on it. People would buy it and a lot of readers would enjoy it. One of my trusted Beta readers says it’s her favorite of all my books.

I know all that.

But for me - it's not as good as the rest of my books and I don't want it out there. It just doesn’t have the theme, the MEANING I want in my books.

I finished it, evaluated it—and then put it away and wrote another.

That was a big gap in my publishing schedule, let me tell you. Good thing I had some savings.

BUT—my next book was Huntress Moon, a real breakthrough in my writing. It was the book and series I was meant to write. The Huntress series combines my political and social activism, my rage at the abuse of children and women and the plain fact that we are not yet as a society committed to ENDING that abuse, and my skill at working those issues into highly readable thrillers. Because I’ve written this series, I honestly could die right now and feel that I’d fulfilled one crucial thing I was meant to do on this planet.

And, oh yeah - it's been bought for television, too.

So my putting that other book away? I don't think that's a coincidence. I think my creative mind and the Universe understood that I was finally ready to do more, mean more, with my writing.

So I beg you all, just as I am begging my workshop students. If you haven't finished the book you're on, DON'T start a new book for Nanowrimo, or the New Year, just because.

Commit to the book you're already writing, in whatever stage of the process you're at, and finish THAT one.

And then go get published.

(This week I heard from a good friend, a fabulous director and writing professor, who says she passed an earlier post of mine like this on to a student of hers - who took the advice, FINISHED her book, and just landed an agent! Just saying....)

My Thriller Award-nominated Huntress/FBI Thrillers is ON SALE for $1.99 each.

A haunted FBI agent is on the hunt for a female serial killer.
This time, the predators lose.
Shop for all five here

Posted by Alexandra Sokoloff at 8:41 AM