Readers are writing in to me this week to comment on the eerie similarities between the plot of my last Huntress novel, Hunger Moon, and the sexual assault accusations against Supreme Court nominee Brett Kavanagh.
That book focused on the rape culture in fraternities that teaches privileged white boys that they can sexually assault girls and young women with impunity, and speculated that the accused sexual predator in the White House might well try to appoint a frat boy sexual predator to the Supreme Court.
And here we are.
Here’s a scene from the book, in which Special Agents Roarke and Epps question a Santa Barbara attorney they suspect of organizing a nationwide rash of vandalism against fraternities.
It’s looking pretty relevant, if I do say so myself.
Please don’t forget to register to vote. And may actual justice prevail.
-       Alex

All five books in The Huntress series currently on sale, $1.99.

--Shop the series--
Hunger Moon is the latest in the series, but The Huntress series is written to be read in order! Book 6, Shadow Moon, will be out in January.

In Hunger Moon, Roarke and his FBI team are forced to confront the new political reality when they are pressured to investigate a series of mysterious threats vowing death to college rapists... while deep in the Arizona wilderness, mass killer Cara Lindstrom is fighting a life-and-death battle of her own. 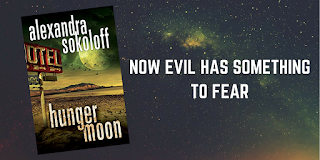