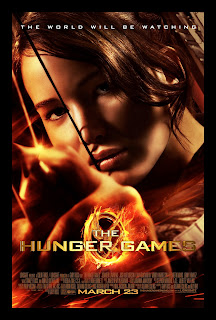 So today we’ll get into a breakdown of THE HUNGER GAMES (the movie) – SEQUENCE I, the SETUP, and work through the story elements up to that all-important PLAN.

If you’re not familiar with the Three-Act, Eight-Sequence Structure of film writing, you’ll want to review this post, or better yet, buy the book: STEALING HOLLYWOOD, which has many, many examples of this structure and its story elements, and includes ten full story breakdowns.

The movie starts with a placard that briefly spells out the history of the Hunger Games, that in punishment for their rebellion against the Capital, every year the twelve districts of the country of Panem must draw a male and a female child tribute from each district to compete to the death in the Hunger Games. Only one tribute will survive.

Opening scrolls or placards give us the sense that this is an Important Story, maybe even epic. (Think of these opening scrolls from classic movies: “A long time ago in a galaxy far, far away” and “For nearly forty years this story has given faithful service to the Young at Heart, and Time has been powerless to put its kindly philosophy out of fashion.”) This placard also gives a sense that the story is history rather than fiction. And it’s the first of many tricks we’ll see the filmmakers use to set up the RULES OF THE STORY WORLD – it's really important to be clear about these in dystopian, SFF or paranormal stories.

One other note: the name of this fictional country, Panem, is a historical reference to the Roman Empire strategy of panem et circenses, ie. “bread and circuses”. Cynical politicians knew they could keep their populace from questioning the Emperor and the Empire’s corruption by distributing free food and staging violent spectacles like gladiator fights and chariot races. Sound familiar?

Then we have the OPENING IMAGE: on a TV screen, two flamboyantly dressed men chat on a talk show, a surreally magnified stage, discussing the upcoming Hunger Games, and again detailing the RULES OF THE WORLD. This is our introduction to two key characters: The Master of Ceremonies/Game host and the Gamemaker, both secondary opponents, and a running THEME of the story: reality TV used as a distraction from the authoritarian cruelty of the country.