by Alexandra Sokoloff
Conference season is almost upon us, with Harrogate, Thrillerfest and Romance Writers of America National Conference next month, Bute Noir in August, Bloody Scotland and Bouchercon in September (please add other conferences!). You may be aware that there is a fierce debate going on in author circles and on festival boards over the need to have sexual harassment policies in place.

The book world is a warm and intimate community, and it’s easy to feel safe at conferences because the vast majority of authors, readers, publishers, bloggers, etc. are genuinely wonderful people. 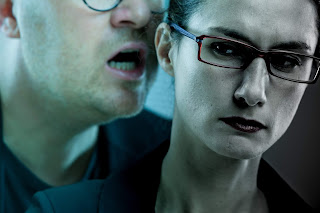 But there are a few predators who do routinely attend these conferences and who use their standing in the book world to harass and prey on vulnerable members of our community.

Many festivals have no anti-harassment policy in place whatsoever, and no place for conference attendees to report predatory behavior.

The boards are queasy about legal issues, obviously, but authors and readers are arguing that festival organizers also have a duty to provide as safe a space as possible to conference goers.

Several conferences have put anti-harassment policies in place: here are links if you’re interested in reading:

Authors and other book people who have been around for a while have another dilemma. We KNOW who some of these habitual predators are, and we can talk to each other and warn our friends, but unless a conference has an anti-harassment policy (including meaningful repercussions) and clear guidelines about who to report to, we have no way of reporting past predatory behavior and repeat offenders to anyone of authority who can or will do anything about it. The more we talk about it amongst ourselves, the more alarming it is that we are just about to launch into these festivities and there is still no way to warn first time attendees about the dangers that we know exist.

Authors, publishers and festival organizers know specifically about authors and publishers who are harassing people, touching aggressively/inappropriately, pressuring other attendees for sex, lying about marital status to rack up conquests, spreading STIs, aggressively hitting on younger attendees obviously too drunk to make consensual decisions (these are just a few of the behaviors that are well known).

Here is a partial list of specific situations I and female author friends have experienced at various crime conferences.

Each one of these was a different man – either an author or a publisher. Some of the behaviors have been reported about more than one man.

I’ve included nothing that I haven’t personally experienced, witnessed, or been told by the woman/women involved, and I haven’t included some of the more serious accusations I know of. And I’m going to phrase this as a question to men, because I think part of the problem here is that even the most woke of our male friends and colleagues have no idea what goes on, and are putting themselves through emotional contortions thinking, “Wait, have I done it?”  My answer to the good guys is NO, you haven’t done it – just check yourself against this list.

At a conference, have you ever….

-       Stayed late in the conference bar chatting up the youngest and drunkest woman in the place, to the point that other authors have had to intervene and escort her home safely?

-       Taken photos of a woman’s body parts without her knowing?

-       Stood outside the hotel window of a woman who just turned you down at the conference bar?

-       Stroked the leg of a woman you’ve just been introduced to, saying you like her tights?

-       Had a conversation with a woman without once lifting your eyes from her chest?

-       Followed a woman you were attracted to around a conference telling everyone “She’s so sexy” and trying to talk to her even when she is in the middle of a conversation with others, on the phone, or obviously otherwise engaged?

-       Shoved a woman up against a wall, held her there and kissed her without her consent?

-       As a publisher, told a female author who just won the Edgar that "women belong barefoot and pregnant"?

-       Comforted a friend going through a nasty divorce when she’s broken down sobbing at the bar - by walking her up to her room, then closing and chain-locking the door and trying to kiss her?

-       Touched the arm of a woman you don’t know two dozen times during a group conversation about sexual harassment and rape?

-       Pursued and started relationships with three different women you met at a con without telling any of the others about the others – or informing any of them that you have a wife, a steady girlfriend on the side, and a serious STD?

I’m asking you all as members of this community – how would YOU want to be informed about these dangers? Do you have suggestions about how we can make our community and these occasions safer for everyone?

Thanks so much for your comments!

And on the subject of sexual abuse:

All five books in my Thriller Award-nominated Huntress series are also on sale for $1.99 US - a perfect chance to catch up before Book 6 comes out this fall.

A haunted FBI agent is on the hunt for a female serial killer. This time, the predators lose.

If you buy the Kindle versions, you can also add RC Bray’s fantastic, award-winning narration for just $3.99, a great Audible bargain.