I'm finding my breakdown of The Hunger Games scarily relevant in this week of forcibly taking children from their parents and incarcerating them to use as pawns in a chess match of authoritarian control. And other dire consequences of giving power to insane game show hosts.

If you missed Sequence One, here it is.

And on to Sequence Two, which begins 20 minutes in. 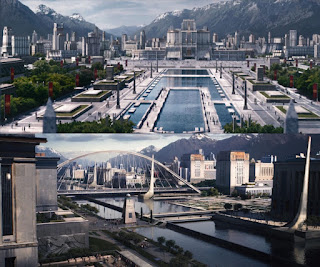 In a sequence that begins with very strong echoes of the first Harry Potter book/movie, Katniss and Peeta journey to the Capitol (sic) by high-speed train.

Katniss and Peeta are escorted by armed guards to the train, and we get another image that echoes the Holocaust: they first enter into just a metal box/boxcar – an ominous, fear-filled moment. That entry then opens up into a luxuriously appointed lounge car. Stepping into this lounge is the first INTO THE SPECIAL WORLD moment: we see Katniss and Peeta reacting the shocking luxury of the car, the gleaming metal and saturated colors, the sumptuous food (however, we can still see the stark metallic walls; the luxury is just set dressing for the cattle car that train is.).

This visceral moment is especially effective because of the deliberate visual CONTRAST to the ORDINARY WORLD, the bare-bones, subsistence-level poverty of District 12 that we saw in Sequence 1. Remember, drama loves contrast, and visual contrast is a great technique for engaging the interest of your reader or audience.

Just as in the first Harry Potter, this train scene GATHERS THE TEAM: Haymitch, the MENTOR, Peeta, the ALLY, and the ever-unhelpful magenta nightmare, Effie, who will nonetheless be able to help with endorsements.

And Peeta vocalizes the next element of the PLAN: he and Katniss need to get as much information out of their designated MENTOR as they can. After all, he did once win the Games.

MEETING THE MENTOR: One of the many, many things this story does well is develop a unique and memorable mentor character, that often-crucial character archetype - so-called for the original mentor, named Mentor, in the Odyssey.

Haymitch is a past (distant past) winner of the games who is supposed to guide the two sacrifices—I mean Tributes—from his district to victory in the Games. But in this scene on the train, Haymitch is clearly hungover and goes straight for the alcohol on the bar. (In the book he’s even more pathetic: we meet him as he falls off a stage, stumbling drunk. In fact, he vomits all over himself on national TV. He has a reputation as a complete buffoon.)
Peeta makes a valiant try to get some helpful information out of Haymitch, but Haymitch responds violently and gives them mocking advice instead: “Accept the fact that you’re going to die and there’s nothing I can tell you to help.” Then he stalks off to drink alone in his room.

Not a great omen for his protégés, right? But doesn’t that up the SUSPENSE incredibly? How are Our Heroes Katniss and Peeta supposed to survive the Games with only this antagonistic loser to guide them?

[25:00] Peeta goes after Haymitch to try to reason with him, and Katniss goes to her own room, where she watches footage of an old Hunger Game being broadcast and analyzed by the commentators on TV (continuing the THEME of the Games being broadcast and analyzed as reality TV and the prescient condemnation of evil reality TV hosts). One tribute kills another to win the game, and we see Katniss’s INTERNAL CONFLICT: she is sickened by the idea of having to kill. This raises the question and FEAR: Can she kill to survive? And the important moral question: Do we actually want her to?

The next morning she leaves her room and finds the dining car, where Peeta is deep in conversation with Haymitch. Katniss has another brief flashback of the rainy day, Peeta feeding the pigs. He sees her shivering in the rain, and turns his back on her to go inside the house. Again, Peeta is being set up as a potential OPPONENT (which he literally is, because only one tribute will survive the Games).

Haymitch taunts Katniss by telling her the most important skill in the arena is making people like you. This introduces another key point in the PLAN (and SETUP for PAYOFFS down the line): Katniss and Peeta must win endorsements in order to get emergency deliveries of food, equipment, medication during the games. Katniss finally gets Haymitch’s attention by flaring up at his dissolution, grabbing a cheese knife and plunging it into the table between his fingers. We see Haymitch is impressed.

This is the beginning of an important SUBPLOT: Haymitch realizes he might have a couple of survivors on his hands, and Katniss will learn at key points that she can actually rely on Haymitch’s sponsorship and guidance. They will develop an almost psychic bond, and Katniss comes to understand through her own growing success in the Games exactly what would have turned Haymitch into an alcoholic: she can see herself going down exactly the same road if she survives/wins (MENTOR AS MIRROR). In the end, Haymitch is the first one she will run to embrace, showing how deep the relationship has become.