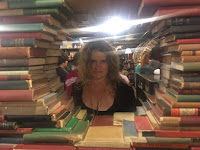 Posted by Alexandra Sokoloff at 1:06 PM

I loved, loved the Huntress series and you did an amazing job with book 5. I was impressed and grateful for your direct and unapologetic approach to weaving in real-life chaos with our country's political sexism. I love your writing style, the suspense and the characterization. Thank you for your powerful and truthful- even if sometimes surreal- stories- they are all linked to in depth research and statistics of the darkest state of our humanity. I hope to read all of your books! Best of luck as your work will hopefully help to enlighten our society.

Denese, thank YOU for taking the time to let me know how you felt about it, especially the very difficult book 5. As you can imagine, I'm getting some hate mail on it, and some trolling - not quite on the level that Singh goes through in the book. :)

But from my point of view we're lost if we can't speak the truth until we make this right again.

Hi Alex, Thank you SO much for writing back to me. My 20 year old step-daughter goes to school at CAL Berkeley and this year she was elected the vice-president of risk management of the UC Berkeley Panhellenic Council. She has become a huge advocate and activist in their struggle to combat the rape culture that is very real in that system with the Fraternities. They are doing some strong work there. My hope is that this year ~ year of the woman~ is a pivot for our future wellness and change. It is hopeful to me that this younger generation is finally starting to take action on so many levels.
Respectfully and gratefully yours,
Denese
PS I can't wait to read your next book!!