by Alexandra Sokoloff, from STEALING HOLLYWOOD: Screenwriting Tricks for Authors

(Elements of Act I checklist is here). 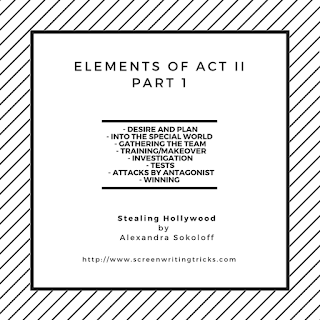 Act II, Part 1 is the most variable section of the four sections of a story. I have noticed it also tends to be the most genre-specific. It doesn’t have the very clear, generic essential elements that Act I and Act 3 do – except in the case of Mysteries and certain kinds of team action films, which generally have a more standard structure in this section.


IF THE FILM IS A MYSTERY, this section will almost always have these elements:

IF THE FILM IS A TEAM ACTION STORY, A WAR STORY, A HEIST OR CAPER MOVIE (like OCEAN’S 11, THE SEVEN SAMURI, THE DIRTY DOZEN, ARMAGGEDON and INCEPTION) then this section will usually have these elements:

There may also be

- A MACGUFFIN
- A TICKING CLOCK

But if the story is not a mystery or a team action story, the first half of Act 2 will often have some of the above elements, and ALL stories will generally have these next elements in Act II, part 1 (not in any particular order):

(This scene may already have happened in Act One, but it often happens right at the end of Act One or right at the beginning of Act Two.) How do the storytellers make this moment important? Is there a special PASSAGEWAY between the worlds?

There is very often a character who tries to prevent the hero/ine from entering the SPECIAL WORLD, or who gives them a warning about danger.

- What is the hero/ine’s PLAN to get what s/he wants?

The plan may have been stated in Act I, but here is where we see the hero/ine start to act on the plan, and often s/he will have to keep changing the plan as early attempts fail.

Same as for the hero/ine: the plan may have been stated in Act I, but here is where we see the villain start to act on the plan, and often s/he will have to keep changing the plan as early attempts fail. Even if the villain is being kept secret, we will see the effects of the villain's plan on the hero/ine.

How do we see the antagonist attacking the hero/ine?

How do we see the hero/ine being tested?

In a mentor story, the mentor will often be designing these tests, and there may be a training sequence or training scenes as well. Sometimes (as in THE GODFATHER) no one is really designing the tests, but the hero/ine keeps running up against obstacles to what they want and they have to overcome those obstacles, and with each win they become stronger.

The hero/ine USUALLY wins a lot in Act II:1 (and then starts to lose throughout Act II:2), but that’s not necessarily true. In JAWS, Sheriff Brody doesn’t get a win until the big defeat of the Midpoint, when he is finally able to force the mayor to sign a check and hire Quint to kill the shark.

This is one of the great pleasures of any story – seeing the hero/ine make lifelong friends or fall in love. Besides the more obvious romantic scenes, the love scenes can be between a boy and his dragon, as in HOW TO TRAIN YOUR DRAGON; or between teammates, as in JAWS; or a man and his father or a woman and her mother (some of the most successful movies, like THE GODFATHER, HOW TO TRAIN YOUR DRAGON, TERMS OF ENDEARMENT and STEEL MAGNOLIAS show these dynamics). What are the scenes that make us feel the glow of love or joy of friendship?

Or in darker stories, instead of bonding scenes, the storytellers may show the hero/ine pulling away from people and becoming more and more alienated, as in THE GODFATHER, TAXI DRIVER, THE SHINING, CASINO.

In a love story, there is always a specific scene that you might call THE DANCE, where we see for the first time that the two lovers are perfect for each other (this is often some witty exchange of dialogue when the two seem to be finishing each other’s sentences, or maybe they end up forced to sing karaoke together and bring down the house…). You see this Dance scene in buddy comedies and buddy action movies as well.

Act II, part 1 is the section of a story that will really deliver on THE PROMISE OF THE PREMISE.

What is the EXPERIENCE that you hope and expect to get from this story? – is it the glow and sexiness of falling in love, or the adrenaline rush of supernatural horror, or the intellectual pleasure of solving a mystery, or the vicarious triumph of kicking the ass of a hated enemy in hand-to-hand combat?

Here are some examples:

- In THE GODFATHER, we get the EXPERIENCE of Michael gaining in power as he steps into the family business. There’s a vicarious thrill in seeing him win these battles.

- In JAWS, we EXPERIENCE the terror of what it’s like to be in a small beach town under attack by a monster of the sea.

- In HOW TO TRAIN YOUR DRAGON, we get the EXPERIENCE and wonder of discovering all these cool and endearing qualities about dragons, including and especially the EXPERIENCE of flying. We also get to EXPERIENCE outcast and loser Hiccup suddenly winning big in the training ring.

- In HARRY POTTER (1), we get the EXPERIENCE of going to a school for wizards and learning and practicing magic (including flying).

(I want to note that for those of you working with horror stories, it’s very important to identify WHAT IS THE HORROR, exactly? What are we so scared of, in this story? How do the storytellers give us the experience of that horror?)

Ask yourself what EXPERIENCE you want your audience or reader to have in your own story, then look for the scenes that deliver on that promise in Act II, part 1. Well, do they? If not, how can you enhance that experience?

And another big but important generalization I can make about Act II, part 1, is that this is often where the specific structure of the KIND of story you’re writing (or viewing) kicks in. For more on identifying KINDS of stories, see What Kind Of Story Is It?

Act II part 1 builds to the MIDPOINT CLIMAX – which in movies is usually a big SETPIECE scene, where the filmmakers really show off their expertise with a special effects sequence (as in HOW TO TRAIN YOUR DRAGON and HARRY POTTER, 1), or a big action scene (JAWS), or in breathtaking psychological cat-and-mouse dialogue (in SILENCE OF THE LAMBS). It might be a sex scene or a comedy scene, or both in a romantic comedy. Whatever the Midpoint is, it is most likely going to be specific to the promise of the genre.

All the information on this blog and more, including full story structure breakdowns of various movies, is available in my Screenwriting Tricks for Authors workbooks.  e format, just $3.99 and $2.99; print 14.99.

Posted by Alexandra Sokoloff at 9:03 AM