JUNOWRIMO: Writing five minutes a day for a year equals a book 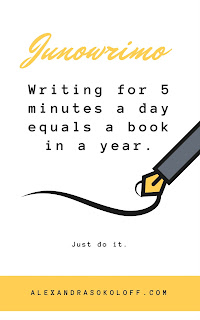 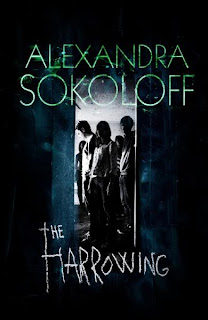 Get free Story Structure extras and movie breakdowns
Posted by Alexandra Sokoloff at 3:26 AM

Email ThisBlogThis!Share to TwitterShare to FacebookShare to Pinterest
Labels: #amwriting, #Junowrimo, Alexandra Sokoloff, how to write a book, how to write a novel, Screenwriting Tricks for Authors, Stealing Hollywood, Story structure, THE HARROWING

This is so true. As a clinical psychologist and published author, I work full-time plus some. I used to rationalize that I needed a time block of at least a few hours to make writing worth my time, which was total crap. I have 2 novels and an anthology story coming out this year, and am on track to finish writing three more books this year despite having a day job. Similar to the 5 minutes a day technique, I make myself do 500 words per day, which adds up quickly and I often go over. It's very doable if you are determined enough. :)

That is so great to hear, Kristi!! It really is a fallacy that you need a few hours for every writing session. As Tibetan master Tsoknyi Rinpoche says (about meditation, but equally applicable): "Short moments, many times.”

500 words a day is a great baseline goal, and totally workable. You go!