Here's the most important thing I can tell you about film story structure that will help you for the rest of your writing life - no matter what form you're writing in.

If you're new to this blog, start here:   Get free Story Structure extras and movie breakdowns

There is a rhythm to dramatic storytelling, just as there’s a rhythm to every other pleasurable experience in life, and the technical requirements of film and television have codified this rhythm into a structure so specific that you actually already know what I’m about to say in this post, even if you’ve never heard it said this way before or consciously thought about it. And what’s more, your reader or audience knows this rhythm, too, and unconsciously EXPECTS it. Which means if you’re not delivering this rhythm, your reader or audience is going to start worrying that something’s not right, and you have a real chance of losing them.

You don’t want to do that!

Early playwrights (and I’m talking really early, starting thousands of years ago in the Golden Age of Greece) were forced to develop the three-act structure of dramatic writing because of intermissions (or intervals). Think about it. If you’re going to let your audience out for a break a third of the way through your play, you need to make sure you get them back into the theater to see the rest of the play, right? After all, there are so many other things a person could be doing on a Saturday night….

So the three acts of theater are based on the idea of building each act to a CLIMAX: a cliffhanger scene that spins the action of the play in such an interesting direction that the audience is going to want to hurry back into the theater at the warning chime to see WHAT HAPPENS NEXT. Many plays break at the middle, so the Midpoint Climax is equally important.

This climactic rhythm was in operation for literally thousands of years before film and television came along and the need for story climaxes became even more, um, urgent. Not just because life was faster paced in the 20th century, but again, because of the technical requirements of film and television.

In a two-hour movie, you have not three climaxes, but seven, because film is based on an eight-sequence structure.

The eight-sequence structure evolved from the early days of film when movies were divided into reels (physical film reels), each holding about 10-15 minutes of film. The projectionist had to manually change each reel as it finished, so early screenwriters incorporated this rhythm into their writing, developing sequences that lasted exactly the length of a reel and built to a cliffhanger climax, so that in that short break that the projectionist was scrambling to get the new reel on, the audience was in breathless anticipation of “What happens next?” – instead of getting pissed off that the movie just stopped right in the middle of a crucial scene. (If you get hold of scripts for older movies, pre-1950’s, you can find SEQUENCE 1, SEQUENCE 2, etc, as headings at the start of each new sequence.)

Modern films still follow that same storytelling rhythm, because that rhythm was locked in by television – with its even more rigid technical requirements of having to break every fifteen minutes for a commercial. Which meant writers had to build to a climax every 15 minutes, to get audiences to tune back in to their show after the commercial instead of changing the channel.

So what does this mean to you, the novelist or screenwriter?

It means that you need to be aware that your reader or audience is going to expect a climax every 15 minutes in a movie – which translates to every 50 pages or so in a book. Books have more variation in length, obviously, so you can adjust proportionately, but for a 400-page book, you’re looking at climaxing every 50 pages, with the bigger climaxes coming around p. 100 (Act I Climax) p. 200 (Midpoint Climax), p. 300 (Act II Climax), and somewhere close to the end. Also be aware that for a shorter movie or book, you may have only six sequences.

If you put that structure on a grid, it looks like this: 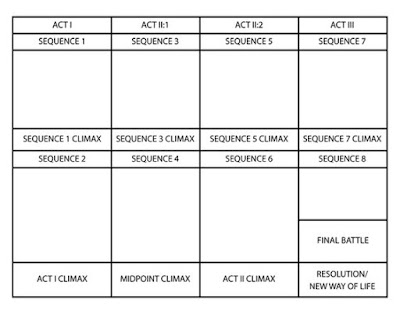 Looking at that grid, you can see that what I started out in this article calling the three-act structure has evolved into something that is actually a four-act structure: four segments of approximately equal length (30 minutes or 100 pages), with Act II containing two segments (60 minutes or 200 pages, total).

That’s because Act II is about conflict and complications. While plays tend to have a longer Act I, because Act I is about setting up character and relationships, the middle acts of films have become longer so that the movies can show off what film does best: action and conflict. And books have picked up on that rhythm and evolved along with movies and television, so that books also tend to have a long, two-part Act II as well.

You don’t have to be exact about this (unless you’re writing for television, in which case you better be acutely aware of when you have to hit that climax!). But you do need to realize that if you’re not building to some kind of climax in approximately that rhythm, your reader or audience is going to start getting impatient, and you risk losing them.

Once you understand this basic structure, you can see how useful it is to think of each sequence of your story building to a climax. Your biggest scenes will tend to be these climaxes, and if you can fit those scenes onto the grid, then you already have a really solid set of tentpoles that you can build your story around.

So here’s the challenge: Start watching movies and television shows specifically looking for the climaxes. Take a film from your Master List (you did make that, didn't you?) Screen it and use the clock on your phone or the counter on your DVD player to check where these climaxes are coming. It won’t take long at all for you to be able to identify climactic scenes.

Your next task is to figure out what makes them climactic!

I can give you a few hints. The most important thing is that the action of your story ASKS A QUESTION that the audience wants to know the answer to. But climaxes also tend to be SETPIECE scenes (think of the trailer scenes from movies, the big scenes that everyone talks about after the movie).

And what goes into a great setpiece scene?

If you'd like to to see more of these story elements in action, I strongly recommend that you watch at least one and much better, three of the films I break down in the workbooks, following along with my notes.

I do full breakdowns of The Matrix, The Wizard of Oz,  Chinatown, Harry Potter and the Sorcerer's Stone, Romancing the Stone, Sense and Sensibility, Four Weddings and a Funeral, Sea of Love, and The Mist - and act breakdowns of You've Got Mail, Jaws, Silence of the Lambs, Raiders of the Lost Ark in Stealing Hollywood.

I do full breakdowns of The Proposal, Groundhog Day, Sense and Sensibility, Romancing the Stone, Leap Year, Notting Hill, Four Weddings and a Funeral, Sea of Love, While You Were Sleeping and New in Town in Writing Love.

Posted by Alexandra Sokoloff at 1:42 PM