It's first day of summer! So here's JAWS…. 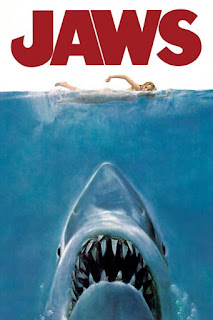 Happy Solstice!! It’s the first day of summer, and naturally our minds turn to thoughts of shark attacks. I mean, of happy days at the beach.

I know that many of you are doing Junowrimo. And you know my advice at this point is JUST KEEP WRITING. But this is the point in a book that you may feel a bit, well, lost. And so I’m going to give you my best advice about how to get UNlost:

When all else fails, go back and take a look at the hero/ine’s PLAN.

•  What does the protagonist WANT?
•  How does he PLAN to do it?
• What’s standing in her/his way?

Then once you’ve got your initial plan, you need to be constantly blocking that plan, either with your antagonist, or the hero/ine’s own inner conflict, or outside forces beyond her or his control. If the hero/ine were able to carry out the plan without a hitch, it wouldn’t make for very good drama, would it?

So throughout the second act, the antagonist has his or her own goal and plan, which is in direct conflict or competition with the hero/ine’s goal. We may actually see the forces of evil plotting their plots, or we may only see the effect of the antagonist’s plot in the continual thwarting of the hero/ine’s plans. Both techniques are effective.

This continual opposition of the protagonist’s and antagonist’s plans is the main underlying structure of the second act.

The hero/ine’s plans should almost always be stated. The antagonist’s plans might be clearly stated or kept hidden, but the effect of his/her/their plotting should be evident. It’s good storytelling if we, the reader or audience, are able to look back on the story at the end and understand how the hero/ine’s failures were a direct result of the antagonist’s scheming.

I’d like to demonstrate all of this by following a plan through a classic movie. And to celebrate the first day of summer, of course that movie is JAWS.

When in Jaws, Sheriff Brody is confronted with the problem of a great white shark eating people in his backyard (ocean), his initial PLAN is to close the beach to swimmers. He throws together some handmade “Beaches Closed” signs and sticks them in the sand. Problem solved, right?

If that initial plan had actually worked, Jaws wouldn’t have made a gazillion dollars worldwide, not to mention cinematic history. The whole point of drama (including romance and comedy) is that the hero/ine’s plan is constantly being thwarted: by the main antagonist, by any number of secondary and tertiary opponents, by the love interest, by the weather, or by the hero/ine him or herself (because you know, we’re all our own worst enemies!).

So almost always, the initial plan fails. Or if it seems to succeed, it’s only to trick us for a moment — before we realize how wretchedly the plan has failed. That weak initial effort is because it’s human nature to expend the least effort possible to get what we want. We only take greater and more desperate measures if we are forced to. And a hero/ine being forced to take greater and more desperate measures is one of the cornerstones of dramatic action.

Now, in Jaws, the primary antagonist is the shark. The shark’s PLAN is to eat. Not just people, but whatever it can sink its teeth into. (Interestingly, that plan seems to evolve….)

Brody’s initial PLAN of closing the beaches might actually have solved his problem with the shark, because without a steady supply of food, the beast probably would have moved on to another beach with a better food supply.

But Brody’s initial PLAN brings out a secondary antagonist: the town fathers, led by the mayor (and with a nice performance by co-screenwriter Carl Gottleib as the newspaper editor). They don’t want the beaches closed because the summer months, particularly the Fourth of July weekend, represent seventy percent (or something like that) of the town’s yearly income. The officials’ PLAN is to keep the beaches open, a direct conflict to Brody’s plan. So the town fathers obliquely threaten new Sheriff Brody with the loss of his job if he closes the beaches, and Brody capitulates.

This proves disastrous and tragic when the very next day (as Brody watches the ocean from the beach, as if that’s going to prevent a shark attack!), another swimmer, a little boy, is killed by the shark practicing its PLAN.

The town fathers hold a town meeting and decide on a new PLAN: they will close the beaches for twenty-four hours. Brody disagrees, but is overruled. Eccentric ship’s captain Quint offers his services to kill the shark —for ten grand. The town fathers are unwilling to pay.

In response, Brody develops a new PLAN, one we see often in stories: he contacts an Expert From Afar, oceanographer Matt Hooper, a shark specialist, to come in and give expert advice.

Meanwhile a new antagonist, the grieving mother of the slain little boy, announces a PLAN of her own: she offers a bounty for any fisherman who kills the shark that killed her son.

The bounty brings on a regatta of fishermen from up and down the eastern seaboard. One of these crews captures a tiger shark, which the mayor is quick to declare is the killer shark. Case closed, problem solved, and the beaches can be reopened. Hooper is adamant that the shark is far too small to have caused the damage done to the first victim, and wants to cut the shark open to prove it. The mayor refuses, and is equally adamant that there is no more need for Hooper. We see that Brody secretly agrees with Hooper, but wants to believe that the nightmare is over. However, when the dead boy’s mother slaps Brody and accuses him of causing her son’s death (by not closing the beaches), Brody agrees to investigate further with Hooper (PLAN), and they sneak into cold storage to cut the shark open themselves to check for body parts. Of course, they discover it’s the wrong shark.

Brody’s revised PLAN is to talk the mayor into closing the beaches, but the mayor refuses again and goes on with his plan to reopen the beaches (and highly publicize the capture of the “killer” shark).

The beaches reopen for 4th of July and the town fathers’ failsafe PLAN is to post the Coast Guard out in the ocean to watch, just in case. While everyone is distracted by a false shark scare, the real shark glides into a supposedly secure cove where Brody’s own son is swimming, and eats a boater and nearly kills Brody’s son. (And the timing is so diabolical that it almost seems the shark has a new PLAN of its own: to taunt Brody and menace his family.)

At that point the mayor’s PLAN changes: he writes a check for Quint and gives it to Brody to hire Captain Quint to kill the shark. But that’s not enough for Brody now. He needs to go out on the boat with Quint and Hooper himself, despite his fear of the water, to make sure this shark gets dead (NEW PLAN).

This happens at the story’s MIDPOINT, and it’s a radical revamp of Brody’s initial plan (which was always to avoid going in the water himself, at all costs). And it’s very often the case that at the midpoint of a story, the initial PLAN is completely shattered.

And yet, Brody is still not ultimately committed. For the next half of the second act, he allows first Quint and then Hooper to take the lead on the shark hunt. Quint’s PLAN is to shoot harpoons connected to floating barrels into the shark and force it to the surface, where they can harpoon it to death. But the shark proves far stronger than anyone expected, and keeps submerging, even with barrel after barrel attached to its hide.

And now a truly interesting thing happens. The shark, supposedly a dumb beast, starts to do crafty things, like hide under the boat so the men think they’ve lost it. It seems to have a new, intelligent PLAN of its own. And when the men’s defenses are down, the shark suddenly batters into the ship and breaks a hole in the hull, causing the boat to take on alarming quantities of water, and making the men vulnerable to attack.
Brody’s PLAN at that point is to radio for help and get the hell off the boat. But in the midst of the chaos, Quint suddenly turns into an opponent himself by smashing the radio — he intends to kill this shark on his own.

Hooper takes over now and proposes a new PLAN: he wants to go down in a shark cage to fire a poison dart gun at the shark. But the shark attacks the cage, and then as the boat continues to sink, the shark leaps half onto the deck and eats Quint.

Brody is now on his own against the shark, and in one last, desperate Hail Mary PLAN (the most exciting kind in a climax), he shoves an oxygen tank into the shark’s jaws and then fires at the shark until the tank explodes, and the shark goes up in bloody bits. As almost always, it is only that last ditch plan, in which the hero/ine faces the antagonist completely on his or her own, that saves the day.

I hope this little exercise gives you an idea of how it can be really enlightening and useful to focus on and track just the plans of all the main characters in a story and how they clash and conflict, especially how they FAIL. Because every time a plan fails, it requires a recalibration and a new action, which builds tension, suspense, emotional commitment, and excitement.

And here’s a hint: you may find it useful to put those huge failures of the plan at your Midpoint and at the Act Two Climax — the Dark Night of the Soul/All Is Lost scene. Every time your hero/ine loses big, it makes the reader wonder WHAT HAPPENS NEXT, and that’s what we’re after, here. You want your reader to be as desperate as your hero/ine is to win.

Now back to writing! Or the beach!


All the information on this blog and more, including full story structure breakdowns of various movies, is available in my Screenwriting Tricks for Authors workbooks.  e format, just $3.99 and $2.99; print 13.99.

Get free Story Structure extras and movie breakdowns
Posted by Alexandra Sokoloff at 8:51 AM No comments:

Email ThisBlogThis!Share to TwitterShare to FacebookShare to Pinterest
Labels: Alexandra Sokoloff, how to write a book, how to write a novel, how to write a screenplay, Jaws, Stealing Hollywood, Three Act Eight Sequence Structure
Newer Posts Older Posts Home
Subscribe to: Posts (Atom)