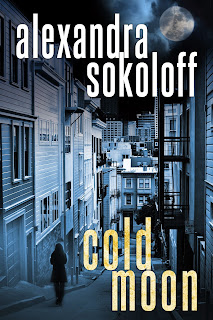 Anyone who's read the first two books in this series knows that I'm very passionate about it. More than passionate.

I'm writing these books because I've had enough.

Last summer I was at Harrogate, the international crime writing festival, and prominently displayed in the book tent was a new crime fiction release that featured a crucified woman on the cover.

A crucified woman. On the cover.

It’s not like I’ve never come across a crucified woman in a crime novel before. In fact, I’ve had to stop reading three or four novels in the past two years when variations of this scene came up. But on the cover, now? The selling image of the novel?

2014 was also the year of the highly praised TV miniseries True Detective, which featured two complex male detectives and a female cast made up entirely of hookers, dead hookers, little dead girls, a mentally challenged incest victim, and the female lead: a wife who cheats on her husband with his partner because she’s too weak to just freaking leave him. Oh right, there was a female love interest who was a doctor – but she had, I believe, one line in the entire show. Maybe two.

Defenders of the show argue, “But the detectives weren’t sympathetic, either.” No, they weren’t, always – but unlike the entire female cast, they were actual, developed characters, not fuck toys for the male characters or – well, corpses.

Then there’s Game of Thrones – a great series that became unwatchable for me a while ago because of the overwhelming frequency of rapes. Defenders of that show say: “But in that world, in those warring countries, there would be a lot of rape. It’s reality.” Yeah, but if you’re arguing realism – the boys and male hostages would be being raped along with the women – just look at the US statistics of male-on-male rape in our own military. But on Game of Thrones, somehow it’s just the women. Over and over and over again.

And difficult as it is to confront the videogame images dissected in Anita Sarkeesian’s sobering series, “Tropes vs.Women”  - I think we can’t afford not to watch and learn. We’re going to have to wake up to the messages teenage boys are growing up with.

Those are just some high-profile examples. Believe me, I could go on all day and not scratch the surface.

So what do we do? How do we counteract the brutalization of women in crime fiction and media?

I suppose as an author you can avoid the issue by writing cozies, or another genre entirely. But I don’t read cozies, and I wouldn’t know how to write one. I used to teach in the L.A. County prison system. I want to explore the roots of crime, not soft-pedal it. For better or worse, my core theme as a writer is “What can good people do about the evil in the world?”

So my choice is to confront the issue head on.

The fact is, one reason crime novels and film and TV so often depict women as victims is because it’s reality. Since the beginning of time, women haven’t been the predators – we’re the prey. Personally, I’m not going to pretend otherwise.

But after all those years (centuries, millennia) of women being victims of the most heinous crimes out there… wouldn’t you think that someone would finally say – “Enough”?

And maybe even strike back?

So my Huntress Moon series is about just that.

The books are intense psychological suspense, and take the reader on an interstate manhunt with a haunted FBI agent on the track of what he thinks may be that most rare of killers – a female serial.

Now, I’ve been studying serial killers for years. Years ago, when I was a screenwriter writing crime thrillers, I tracked down the FBI’s textbook on sexual homicide before it was ever available to the public. I attend Citizens Police Academies and other law enforcement and forensics workshops whenever I get the chance. If I know there’s a behavioral profiler at a writing convention, I stalk that person so I can pick his or her brain about serial killers. And I attend Lee Lofland’s fantastic Writers Police Academy (a yearly three-day conference that’s a law enforcement and forensics immersion course).

And here’s what’s really interesting. Arguably there’s never been any such thing as a female serial killer in real life. The women that the media holds up as serial killers actually operate from a completely different psychology from the men who commit what the FBI calls “sexual homicide”.

Even Aileen Wuornos, infamous in the media as “America’s First Female Serial Killer” wasn’t a serial killer in the sense that male killers like Bundy, Gacy and Kemper were serial killers. The profilers I’ve interviewed call Wuornos a spree killer with a vigilante motivation. (I write about her case, and the psychology of other real life mass killers, in Huntress Moon.)

So what’s that about? Why do men do it and women don’t? Women rarely kill, compared to men — but when it happens, what does make a woman kill?

Within the context of my Huntress series I can explore those psychological and sociological questions, and invite my readers to ask – Why? I can realistically bring light on crimes that I consider pretty much the essence of evil – and turn the tables on the perpetrators.

I do not depict rape or torture on the page. I can assure you, no one gets crucified. I think real life crime is horrific enough without rubbing a reader’s face in it or adding absurd embellishments (my personal literary pet peeve is the serial killer with an artistic streak or poetic bent).

In this series I can pose questions about human evil, as it actually presents in real life, without exploiting it. And I’ve created a female character who breaks the mold – but in a way that makes psychological sense for the overwhelming majority of people who read the books.

Whoever she is, whatever she is, the Huntress is like no killer Agent Roarke – or the reader – has ever seen before. And you may find yourself as conflicted about her as Roarke is.

Because as one of the profilers says in the book: “I’ve always wondered why we don’t see more women acting out this way. God knows enough of them have reason.”

Books 1, 2 and 3 of the Huntress/FBI Thrillers, Huntress Moon, Blood Moon, and Cold Moon are available now from Thomas & Mercer.

I very strongly recommend that you read the series in order, starting with Huntress Moon.

Great post on this topic, Alex.Very insightful and promising area of writing to commit to.

I have nothing to add except something I learned in neuroscience classes. As visualized on scans, the brain reacts the same (as in lighting up areas that are stimulated/excited) to real events as it does while watching a film or reading, whether visually, listening, or by imagining. Due to location in the brain with its overlapping neuronal structure, fear can be as much a stimulus for physical pleasure—however unwanted it might be—as anything else. That's what masochism is all about.

I will stop myself here. The topic can get very unpleasant when discussing from the sadistic side of the experience. I have no interest in studying or learning about it anymore than I already have. Like you, I've had to stop reading books that I liked until the point where they became graphic.

Often I am left with the impression that evil-doers are inspired by what is portrayed. The more detailed the easier to imitate.

I cringe when the thought pattern is in detail as instructions for, say, making a bomb. Also, I don't need to know the exact location of every knife slash if that is the gist of the action. Do we really need all those instructive details for sake of the story?

I don't feel the need for such details to follow the story. My opinion exceeds the depiction of violence against women.

Reine, thanks for that sobering example from your neuroscience studies. FBI profilers are absolutely convinced that watching violent pornography feeds the fantasy of rapists and serial killers until they need the added stimulus of acting out in real life.

How many people are watching Rape of Thrones? Shouldn't we be worried?

Picked up by the Scottish Herald:

Of all the bizarre images I’ve seen on book covers and movie posters, a crucified female would be a first for me. And it’s a truly unique – gruesome as it is – vision. Unique in that it’s a rarity in either literature or cinema. I’ve heard this argument about violence against women in TV and films, yet the reality is that the bulk of violence in entertainment is against males: men and boys. In fact, I can probably count one hand instances in which I’ve seen slapstick violence against females. But the amount slapstick violence against males is innumerable. “America’s Funniest Home Videos” made the proverbial groin shot – even against young boys – wholesome family fun. If there’s any violence committed against women in American entertainment, it’s usually presented in a highly dramatic context; e.g. domestic abuse situations where the male perpetrator ultimately gets caught.

This is on top of such things as Selective Service, which applies only to males and essentially makes cannon fodder of us. There’s the Violence Against Women Act, which now also applies to lesbian and transgendered women. And finally, there’s the Female Genital Mutilation Prevention Act, which the U.S. Congress passed overwhelmingly in 1996 to protect infant females against a barbaric procedure that never existed in this country or anywhere outside of a handful of Neanderthal-type communities in Africa and Asia. Meanwhile, between 100 and 300 infant and toddler males die from botched circumcisions every year in the U.S. Yet, any attempts to ban male circumcision are met with howls of extremist liberal protest about religious freedom.

In the 1967 movie “Bonnie and Clyde,” audiences expressed horror at the sight of a bullet going through Faye Dunaway’s head, but said nothing about Warren Beatty getting shot up. In the 1978 movie “Midnight Express,” which was also based on a true story, people booed when two men looked like they were about to make out in the shower, but cheered at the stabbings and beatings. The 1980 movie “Little Darlings” opens with Kristy McNichol kicking a boy squarely in the groin; a move that generated so much laughter in theatres that the ensuing music while the opening credits played couldn’t be heard, according to some reviewers. I could go on and on with other examples. But, like I said, there are too many to mention.

Indeed, there is too much violence in American TV shows and movies. This nation’s idea of obscenity is truly warped.

Alejandro, I absolutely agree that there is plenty of violence against men in TV and film. But you do realize, don’t you, that that programming is created by MEN? In any given year, only 1 ½ % to 3% of all Hollywood directing is done by women. Gender discrimination is so rampant that the ACLU is bringing suit against the studios. And the violence against women that I’m talking about in Game of Thrones and True Detective is SEXUALIZED. It is presented for titillation and is wildly unbalanced (serial killers rape and kill men and boys as well as women, and male and boy prisoners and slaves are raped, but we never see that happening on these shows.)

If you can name me any examples of sexualized violence against men, I’d like to hear them so I can seek that out and watch. But I’m not aware of any myself, and I’ve never gotten a response back from anyone I’ve asked the question of.

And if you want less violence against men on TV, then you need to tell that to the men who are filming it.