This month is Women in Horror Month.  Don’t ask me how these things get decided!  But since February has Valentine’s Day, Mardi Gras and Leap Day, and is also the shortest month of the year and the only month of the year that actually changes in number of days – and is closest to a true moon cycle! - I guess there’s some kind of psychic sense to it.

Actually I never remember it’s Women in Horror Month until I start getting Google Alerts because I’m showing up on the lists of female horror authors to read.

As a matter of fact, I had a very short tenure writing horror. My first two books, The Harrowing and The Price, are really the only books I’ve written that I could classify as horror. My third book, The Unseen, was really a mystery/suspense - with poltergeists. My fourth, Book of Shadows, was when I really started moving into crime, although there is a strong possibly supernatural element in that book as well.


I find it disgusting and harmful and it doesn’t deserve to be listed with the true psychological horror of Jackson, Lovecraft, Shelley, DuMaurier, King, Poe – the great explorers of the dark side.

(I am often asked to blurb books and I find it surreal that I have had to start telling male writers up front: “I won’t read or review anything with rape scenes - unless you’re honestly exploring your own fear of male-on-male rape.”  Same goes for torture. There is somehow not even the basic awareness that scenes like that would bother me.)

There’s also a widely acknowledged bias in the industry against female horror authors (probably one of the reasons there’s a Women in Horror Month to begin with.) That bias didn’t ever affect me in a practical sense because I quickly moved into writing and publishing very dark thrillers rather than overt horror. Quite possibly being a female author in a male-dominated genre got me more attention for my first two novels than I might have gotten if I were writing straight mystery or crime, because so few women were writing full-length horror at the time. But that attention was probably cancelled out by the fact that horror is a lesser-read genre that doesn’t pay as well as the crime/thriller genre.

I love both genres. I went back and forth and crossed the two as a screenwriter, too. But I’m a full-time writer, so I’m not going to struggle against a genre that brutalizes women AND doesn’t pay as well as the thriller genre.  What possible sense would there be in that?

And practicality aside – I find the crime genre a better fit for my own themes as a writer. My writing is largely an exploration of good and evil, and nothing supernatural could possibly be more horrifying to me than the evil that people do.  And I mostly mean what MEN do: serial killing, rape, child molestation, torture, genocide, war crimes. These are largely male crimes – so why aren’t we being honest about that fact? How can we prevent and heal the ravages of those crimes without being honest about root causes?

Those are questions I’ve found I can explore more fully in a crime novel. I can use the examples of real crimes. I can hint at practical societal solutions.

But I also think that my tenure as a horror writer taught me how to bring that sense of true evil into my crime novels, and continues to help me provide a touch of the sensual thrill of the uncanny – that sensation I love in a good psychological horror tale. It was the right place to start, and I’m sure it’s only a matter of time before I’ll be tempted back to the dark side again.

So readers – do you read in the horror genre as well as in crime, suspense, mystery and thrillers? Or does the genre give you pause, maybe for the same reasons I wrote about above?

And authors, have you dabbled in the dark side? Or, horror aside, have you made a genre switch for practical or thematic reasons?

For Women in Horror month, my boxed set Haunted is on sale - three complete scary novels for $5.99.

Buy on Amazon US 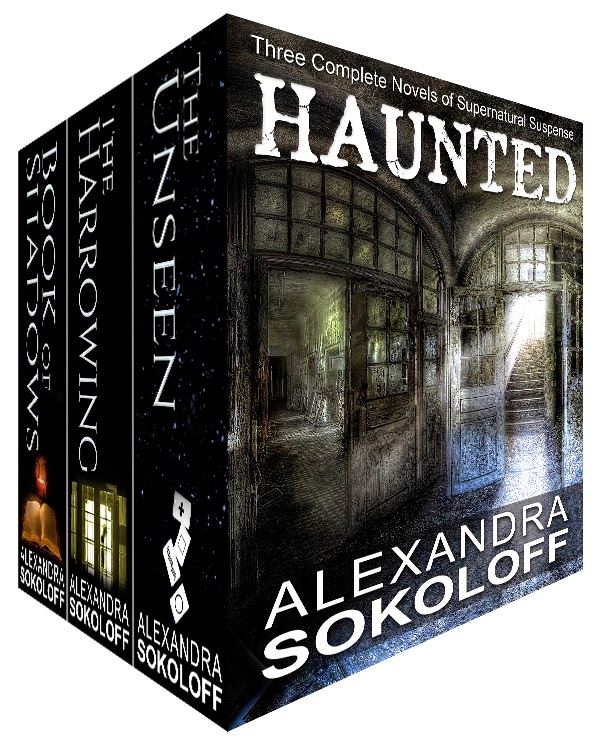 Posted by Alexandra Sokoloff at 2:03 AM

I'm with you. I don't like novels in the horror genre if the theme is horror perpetrated by human evil in the form of rape, torture or murder.
Give me an other worldly creature. Give me something Lovecraftian. Human monsters scare me.

Alex, I qualify my agreement by saying that my feelings and desire to read a book depend on where the focus is. Is it on exploiting the victim or admiring the perpetrator? Even indirectly? If it is I'm not interested. But if the story is about the crimes and solving them and developing a sound psychological platform I would be interested in reading it,

I don't think anything is wrong about telling the story of a very real problem in an engaging book—as it does not exploit the victim or aggrandize the perpetrator. In any area of crime writing you will find people reading them for their own need. You cannot stop that from happening. You can turn it into fantasy or science fiction but you will be writing the same story dressing it up in something that, superficially, doesn't look real. And that person who will feed off the part you hate or shrink from will find that story no matter where you place it in time or space.

Your horror stories Will be read over again. Shouldn't they be listed as horror stories? I know the books you don't want to be associated with. You can't stop that. No matter what you write.

I enjoy a good cozy mystery. But Alex — I don't picture you writing a cozy.

I agree with you that the very best horror is of that chilling, slow-burn quality which lingers with you afterwards - it doesn't have to be misogynistic or graphic or torturing... But, like chick lit, horror is such a wide-ranging 'genre' - which is why genre labels overall make me uncomfortable.

Rollin, I'm with you on Lovecraft! Such a master of environmental terror. Crossed with psychological terror.

Alexandra Sokoloff said...
This comment has been removed by the author.
1:03 AM

Reine, I agree. Believe me, these books I've been saying I won't read were not the kind of book I imagine you reading!

I agree with you, it's a tricky proposition to write about crime, and there's always going to be someone who can interpret it for evil. But my favorite writers and filmmakers, male and female, are very careful not to sensationalize crime. With the Bosch TV series, for example - in other hands, that serial killer would have been killing women and the murders and bodies would have been sexualized - as they are in True Detective and The Fall, just to name two obvious offenders. But with Bosch, it's a lot harder to get aroused by the violence, I think.

Marina, I struggle with genre labels, too (and it drives my publishers fairly crazy!). Unfortunately genre is a convenient marketing tool.

Yes, I never could read graphic horror. I would started to read a mystery that I thought was just a mystery. There was nothing that clued me in that it was what it was. I starting to read it and realized that it was written in the present tense first person. And she was the victim. I thought I was going to throw up even though I never got to the worst part. The big tension build up, of course, was knowing what was coming. Something told me since she was the protagonist it was likely she'd be around till the end of the book. But I wasn't reading one more line to find out if the author had other disgusting tidbits waiting. So yeah you're right. xo