THE UNSEEN on sale, 99 cents for Kindle!

For everyone who got Kindles for Christmas, or anyone who's planning to read in bed until the New Year, my parapsychology thriller The Unseen is on sale this week for just 99 cents for Kindle.  So if you're looking for a cheap thrill.... :)

The Unseen is fiction, but there's a lot of reality woven in, in history and location.

I have a posse of mystery writer friends (I should say goddesses!): Margaret Maron, Sarah Shaber, Diane Chamberlain, Katy Munger, Mary Kay Andrews and Brynn Bonner.  Several times a year we go on retreat to the beach or the mountains or some generally fantastic place. We work all day long by ourselves and then convene at night to drink wine and brainstorm on any problem that any one of us is having (and of course, compare page counts!).

And one of our favorite retreats is the Artist in Residence program at the Weymouth Center in Southern Pines, NC. 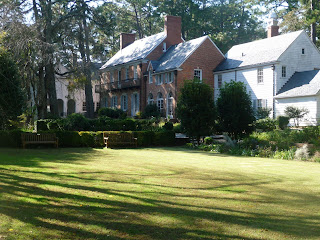 (More photos here!)
Weymouth is an amazing place – a 9000 sq. foot mansion on 1200 acres (including several formal gardens and a 9-hole golf course) that’s really three houses melded together. It was what they called a “Yankee Playtime Plantation” in the last quarter of the nineteenth century, the fox hunting lodge of coal magnate James Boyd.  James Boyd’s grandson James rebelled against the family business to become - what else? - a novelist. Boyd wrote historical novels, and his editor was the great Maxwell Perkins (“Editor of Genius”), and in the 1920’s and 30’s Weymouth became a Southern party venue for the likes of F. Scott Fitzgerald, Sherwood Anderson, and Thomas Wolfe. That literary aura pervades the house, especially the library, with all its photos and portraits of the writers who have stayed at the house.
It’s a fantastic place to write – pages just fly.

When you write ghost stories, PLACE is hugely important - it's got to be absolutely a character in the book, just as much as the human characters are.
And The Unseen  is a haunted house story – two psychology professors take a group of psychically gifted students into a house with a history of poltergeist manifestations, to replicate a controversial experiment from the 1960’s.  I was inspired by the real-life, world famous ESP testing and poltergeist investigations that took place at the Duke University parapsychology lab, headed by Dr. J.B. Rhine.

You probably recognize those cards, which were used in laboratory tests to determine through statistical analysis whether ESP really occurs.   Two test subjects would sit at a table divided by a screen, and one subject, the sender, would flip through a deck of 25 cards, concentrating on one card at a time, while the receiver would write down her or his guesses about what that card was.
Pure chance is 20% right, so any score significantly above chance was considered to be an indicator of some psychic ability.   And if you want to try it for yourself, here's an online version of the test!
As the daughter of scientists, I was always completely fascinated by the idea of testing something as spooky cool as ESP in a laboratory setting.   But what really hooked me about the history of the Rhine lab was that in the sixties, the researchers started doing field research of haunted houses and poltergeists.
Poltergeists!
I know what a ghost is, kind of, but a poltergeist is such an elusive - creature.   Is it the random sexual energy of an adolescent gone wild?    Is it a particularly noisy and mischievous ghost?   Is it an otherworldly entity?   Or is it just a teenager faking spooky effects for attention?
The mystery of it has always fascinated me.
Now, I truly believe that when you commit to a story, the universe opens up all kinds of fantastic opportunities to you.   And I started writing THE UNSEEN at the same time that our group had its first trip to Weymouth. In fact, we came down to the house on the very day that my characters were moving into THEIR haunted house.
(I’m telling you, writing is a little scary.  More than a little scary, in this case…)
Some of us had some truly spooky encounters in that place.   Every time I turned around there was knocking on the walls (the pipes in the kitchen), weird manifestations (a ghostly team of horses trotting by with a buggy on the road outside) and rooms that were just too creepy to go into after dark.  One night I had to go all the way back upstairs, across the upstairs hall and around to the front stairs to get to a room I wanted to go to because I was too freaked out to cross the Great Room in the dark.   And another one of us had the classic “Night Hag” visitation:  she woke up feeling that someone or something was sitting on her chest.  Brrrrr…..
One prevalent theory of hauntings is that a haunting is an imprint of a violent or strong emotion that lingers in a place like an echo or recording.   I’ve always liked that explanation.
Well, this house was imprinted, all right, but far beyond what I had expected.
Because besides the requisite spooky things… that house was downright sexy.  There’s no other way to say it.   Seriously - hot.
I had ridiculously, I mean – embarrassingly -  erotic dreams every night.  There were rooms I walked into that made my knees go completely weak.   The house, the gardens, even the golf course, just vibrated with sex.
Now, maybe that was just the imprint of creativity – the whole mansion is constantly inhabited by writers and musicians, and as we all know, creativity is a turn-on.
But also, consider the history.   As I said – Weymouth was a “Yankee Playtime Plantation”.   Rich people used that house specifically to party - in the Roaring Twenties, no less.   (Think THE GREAT GATSBY!).   God only knows how many trysts, even orgies, went on.   So could sex imprint on a place, just as violence or trauma is supposed to be able to imprint?
It makes sense to me.
That sexual dynamic surprised the hell out of me, but it completely worked with my main character’s back story - she’s a young California psychology professor who impulsively flees to North Carolina after she catches her fiancé cheating on her.  (Actually, she dreams her fiancé is cheating on her, in exactly the scenario that she catches him in later.)    So her wound is a specifically sexual one, and one of her great weaknesses is that she’s vulnerable to being sexually manipulated.
Add to that that the most prevalent explanation of a poltergeist is that it’s hormones run amok:  that the projected sexual energy of an adolescent or young adult can randomly cause objects to move or break.
So of course I went with it.   It wasn’t anything to do with my outline, but California girl that I am, how can I not go with the obvious flow?
I think it adds a great dimension to the story, in a way I never could have anticipated, and I’m pleased to have been true to the - um, spirit - of poltergeists.
So first, I’m always interested in hearing your ghost and psychic experiences.  Come on, I know you have them.  And then of course, there's the "How far will you go to research?" question!  Do you all take this to the same extremes I do?
- Alex

Posted by Alexandra Sokoloff at 4:28 AM