We're getting close, now - in a few days you're going to be putting all this prep to the side and jumping in to write.

I'll post prompts along the way for the month of November, and review the elements of all the Acts in order at about the time you'll be hitting them. But in the last few days, I'm going to give you two exercises to give you a road map for your month ahead.

This is the number one structuring tool of most screenwriters I know. I have no idea how I would write without it.

Get yourself a pack of index cards. You can also use Post-Its, and the truly OCD among us use colored Post-Its to identify various subplots by color, but I find having to make those kinds of decisions just fritzes my brain. I like cards because they’re more durable and I can spread them out on the floor for me to crawl around and for the cats to walk over; it somehow feels less like work that way. Everyone has their own method - experiment and find what works best for you.

Now, get a corkboard or a sheet of cardboard - or even butcher paper - big enough to lay out your index cards in either four vertical columns of 10-15 cards, or eight vertical columns of 5-8 cards, depending on whether you want to see your story laid out in four acts or eight sequences. You can draw lines on the corkboard to make a grid of spaces the size of index cards if you’re very neat (I’m not) – or just pin a few marker cards up to structure your space.  I find the tri-fold boards that kids use for science projects just perfect in size and they come pre-folded in exactly three acts of the right size!  Just a few dollars at any Office Max or Staples.

And now also label the beginning and end of where eight sequences will go. (In other words, you’re dividing your corkboard into eight sections – either four long columns with two sections each, or eight shorter columns).

Here is a photo of the grid on a white board - with sticky Post Its as index cards: 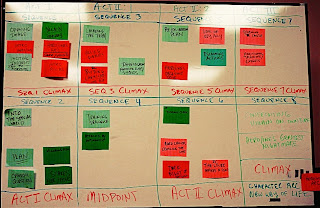 And an example of index cards on a tri-fold board: 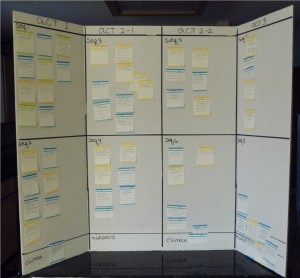 So you have your structure grid in front of you.

What you will start to do now is brainstorm scenes, and that you do with the index cards.

A movie has about 40 to 60 scenes (a drama more like 40, an action movie more like 60),  every scene goes on one card. Now, if you’re structuring a novel this way, you may be doubling or tripling the scene count, but for me, the chapter count remains exactly the same: forty to sixty chapters to a book.

This is the fun part, like putting together a jigsaw puzzle. All you do at first is write down all the scenes you know about your story, one scene per card (just one or two lines describing each scene - it can be as simple as - "Hero and heroine meet"  or - "Meet the antagonist".)  You don’t have to put them in order yet, but if you know where they go, or approximately where they go, you can just pin them on your board in approximately the right place. You can always move them around. And just like with a puzzle, once you have some scenes in place, you will naturally start to build other scenes around them.

I love the cards because they are such an overview. You can stick a bunch of vaguely related scenes together in a clump, rearrange one or two, and suddenly see a perfect progression of an entire sequence. You can throw away cards that aren’t working, or make several cards with the same scene and try them in different parts of your story board.

And this eight-sequence structure translates easily to novels. And you might have an extra sequence or two per act, but I think that in most cases you’ll find that the number of sequences is not out of proportion to this formula. With a book you can have anything from 250 pages to 1000 (well, you can go that long only if you’re a mega-bestseller!), so the length of a sequence and the number of sequences is more variable. But an average book these days is between 300 and 400 pages, and since the recession, publishers are actually asking their authors to keep their books on the short side, to save production costs, so why not shoot for that to begin with?

I write books of about 350-400 pages (print pages), and I find my sequences are about 50 pages, getting shorter as I near the end. But I might also have three sequences of around 30 pages in an act that is 100 pages long. You have more leeway in a novel, but the structure remains pretty much the same.

In the next few posts we’ll talk about how to plug various obligatory scenes into this formula to make the structuring go even more quickly – key scenes that you’ll find in nearly all stories, like opening image, closing image, introduction of hero, inner and outer desire, stating the theme,  call to adventure/inciting incident, introduction of allies, love interest, mentor, opponent, hero’s and opponent’s plans, plants and reveals, setpieces, training sequence, dark night of the soul, sex at sixty, hero’s arc, moral decision, etc.

And for those of you who are reeling in horror at the idea of a formula… it’s just a way of analyzing dramatic structure. No matter how you create a story yourself, chances are it will organically follow this flow. Think of the human body: human beings (with very few exceptions) have the exact same skeleton underneath all the complicated flesh and muscles and nerves and coloring and neurons and emotions and essences that make up a human being. No two alike… and yet a skeleton is a skeleton; it’s the foundation of a human being.

And structure is the foundation of a story.

-- Get a pack of index cards or Post Its and write down all the scenes you know about your story, and where possible, pin them onto your WIP structure grid in approximately the place they will occur.

If you are already well into your first draft, then by all means, keep writing forward, too – I don’t want you to stop your momentum. Use whatever is useful about what I’m talking about here, but also keep moving.

And if you have a completed draft and are starting a revision, a structure grid is a perfect tool to help you identify weak spots and build on what you have for a rewrite. Put your story on cards and watch how quickly you start to rearrange things that aren’t working!

Now, let me be clear. When you’re brainstorming with your index cards and you suddenly have a full-blown idea for a scene, or your characters start talking to you, then of course you should drop everything and write out the scene, see where it goes. Always write when you have a hot flash. I mean – you know what I mean. Write when you’re hot.

Ideally I will always be working on four piles of material, or tracks, at once:

1. The index cards I'm brainstorming and arranging on my structure grid.

2. A notebook of random scenes, dialogue, character descriptions that are coming to me as I'm outlining, and that I can start to put in chronological order as this notebook gets bigger.

3. An expanded on-paper (or in Word) story outline that I'm compiling as I order my index cards on the structure grid.

4. A collage book of visual images that I'm pulling from magazines that give me the characters, the locations, the colors and moods of my story (we will talk about Visual Storytelling soon.)

In the beginning of a project you will probably be going back and forth between all of those tracks as you build your story. Really this is my favorite part of the writing process – building the world – which is probably part of why I stay so long on it myself. But by the time I start my first draft I have so much of the story already that it’s not anywhere near the intimidating experience it would be if I hadn’t done all that prep work.

At some point (and a deadline has a lot to do with exactly when this point comes!) I feel I know the shape of the story well enough to start that first draft. Because I come from theater, I think of my first draft as a blocking draft. When you direct a play, the first rehearsals are for blocking – which means simply getting the actors up on their feet and moving them through the play on the stage so everyone can see and feel and understand the whole shape of it. That’s what a first draft is to me, and when I start to write a first draft I just bash through it from beginning to end. It’s the most grueling part of writing, and takes the longest, but writing the whole thing out, even in the most sketchy way, from start to finish, is the best way I know to actually guarantee that you will finish a book or a script.

Everything after that initial draft is frosting – it’s seven million times easier to rewrite than to get something onto a blank page.

Then I do layer after layer after layer – different drafts for suspense, for character, sensory drafts, emotional drafts – each concentrating on a different aspect that I want to hone in the story – until the clock runs out and I have to turn the whole thing in.

But that’s my process. You have to find your own. If outlining is cramping your style, then you’re probably a “pantser” – not my favorite word, but common book jargon for a person who writes best by the seat of her pants. And if you’re a pantser, the methods I’ve been talking about have probably already made you so uncomfortable that I can’t believe you’re still here!

Still, I don’t think it hurts to read about these things. I maintain that pantsers have an intuitive knowledge of story structure – we all do, really, from having read so many books and having seen so many movies. I feel more comfortable with this rather left-brained and concrete process because I write intricate plots with twists and subplots I have to work out in advance, and also because I simply wouldn’t ever work as a screenwriter if I wasn’t able to walk into a conference room and tell the executives and producers and director the entire story, beginning to end. It’s part of the job.

But I can’t say this enough: WHATEVER WORKS. Literally. Whatever. If it’s getting the job done, you’re golden.

Next up - a list of essential story elements that will help you brainstorm your index cards.


And - if you are getting something out of these posts and/or the workbooks, please take a moment to click through to my Amazon Author page and Like the page by clicking on the Like button at the top right of the screen. It's a very quick way to support this blog that costs nothing and makes a big difference.


If you're a romance writer, or have a strong love plot or subplot in your novel or script, then Writing Love: Screenwriting Tricks II is an expanded version of the first workbook with a special emphasis on love stories, and more full story breakdowns.


Posted by Alexandra Sokoloff at 1:20 PM

Hey Alex,
Started a day early. I'm writing a horror and felt it was fitting to start on Oct 31. 800 words.

Timing is everything, right? That's a really auspicious launch day!