Happy Fall!  (That’s Autumn over here in Scotland, as my Scottish friends keep reminding me….)

This is a hugely overextended – I mean exciting - time of year for me because October means spooky books. This autumn I’m running some fantastic sales on my Haunted thrillers throughout October.

This weekend you can get The Unseen for just $1.99.  This spooky thriller is based on the real life, world-famous Rhine parapsychology experiments that took place at Duke University in the 1960’s.

The sale will go on with the price slowly rising for a week, then I'll be announcing sales for more books. At various times during the month you’ll be able to pick up The Harrowing,  The Price, The Space Between and Book of Shadows for Kindle, at prices ranging from just 99 cents to $2.99. 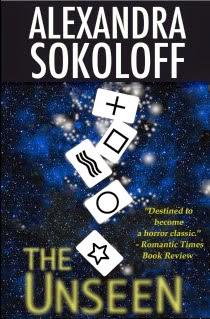 After experiencing a precognitive dream that shatters her engagement and changes her life forever, young California psychology professor Laurel MacDonald decides to get a fresh start by taking a job at Duke University in North Carolina. She soon becomes obsessed with the long-buried files from the world-famous Rhine parapsychology experiments, which attempted to prove if ESP really exists.

Laurel reluctantly teams up with charismatic rival professor Ian Brady and the two uncover disturbing reports, including a mysterious case of a house supposedly haunted by a poltergeist, investigated by another research team in 1965. The two professors and two exceptionally gifted Duke students move into the grand, abandoned mansion to replicate the investigation, unaware that the entire original team ended up insane... or dead.

"Sokoloff keeps her story enticingly ambiguous, never clarifying until the climax whether the unfolding weirdness might be the result of the investigators' psychic sensitivities or the mischievous handiwork of a human villain."
-- Publisher's Weekly

"Sokoloff shines, and deserves kudos for her crisp, direct style, excellent characterization, and for weaving the real life history of the Duke Rhine lab into her own fictional landscape."
-- Horrorworld
"This spine-tingling story has every indication of becoming a horror classic... a chillingly dark look into the unknown."
-- Romantic Times Book Reviews, 4 ½ stars

October is also the month I do my annual Nanowrimo prep series, right here on this blog.

For the authors and aspiring authors who are contemplating participating in the divine madness that is National Novel Writing Month (in November), I always do a brainstorming and story structure review series in October, and continue throughout November with prompts and encouragement, based on my Screenwriting Tricks for Authors workbooks and workshops.

Because if you’re going to put a month aside to write 50,000 words, doesn’t it make a little more sense to have worked out the outline, or at least an overall roadmap, before November 1? I am pretty sure that far more writing, and far more professional writing, would get done in November if Wrimos took the month of October to really think out some things about their story and characters, and where the whole book is going. It doesn’t have to be the full-tilt-every-day frenzy that November will be, but even a half hour per day in October, even fifteen minutes a day, thinking about what you really want to be writing - would do your potential novel worlds of good.

Of course you can start work now with either of the Screenwriting Tricks for Authors workbooks - $2.99 and $3.99.

Posted by Alexandra Sokoloff at 2:26 AM

I have always wanted to take part in Nanowrimo, but work at my day job always seems to make it impossible. One of these days, I'm going to do it though! I may have to just pick a different month. :)

Hey Jenni! You could pick a different month, or you could just commit to a lower word goal. The 50,000 word rule is just one guideline. Never mind that! Make your own goal! When I was writing The Harrowing I was doing the film job from hell, but I ALWAYS sat down late at night to do a little work on the novel. "Just five minutes," I'd tell myself. It's amazing how you can move a book along by committing to five minutes a day. You always end up finding more time.

Hi Alex. I have been following your blog since you did a guest post on Joe Konrath's blog last year. I have found your blog as well as Screen Writing Tricks for Authors to be extremely useful. I was intrigued by Nanowrimo last year when I heard of it. I'm almost finished the first draft of my WIP and this might be a great challenge. I think I'd have to create my own target as 50k would not be possible but 25-30 might be if I'm very organized ahead of time. I'm so motivated, after I read this post tonight, I went back and read the first six chapters of your book. Looking forward to more posts as we near November. Thanks.
Silas

Silas, it sounds like the extra stimulation of Nano would be a great motivator for you to finish your draft! Nothing like outside pressure! :)

And there's absolutely nothing to lose. Whether you hit your target exactly or not, who cares? You'll for sure get extra work done, and you might well finish that draft.