One of the great pleasures of living in Scotland is the month-long Edinburgh Festival Fringe. A pleasure if you don’t actually live in Edinburgh, that is. Residents talk about the Fringe as they would about a plague, which I suppose it is: 20,000+ performers and God only knows how many tourists from all over the world descending on a really quite small (and ancient) city center (that’s centre over here), for the world’s largest arts festival (and the Fringe is only ONE of the festivals). It’s a riot of buskers, street theater, acrobats, jugglers, musicians, crafts, food, bagpipes, and general mayhem on the streets - before you even get to the 3000+ shows a day in various commercial venues.

So we went in last week to see my friends Reed Martin and Austin Tichenor of the Reduced Shakespeare Company in their new show: 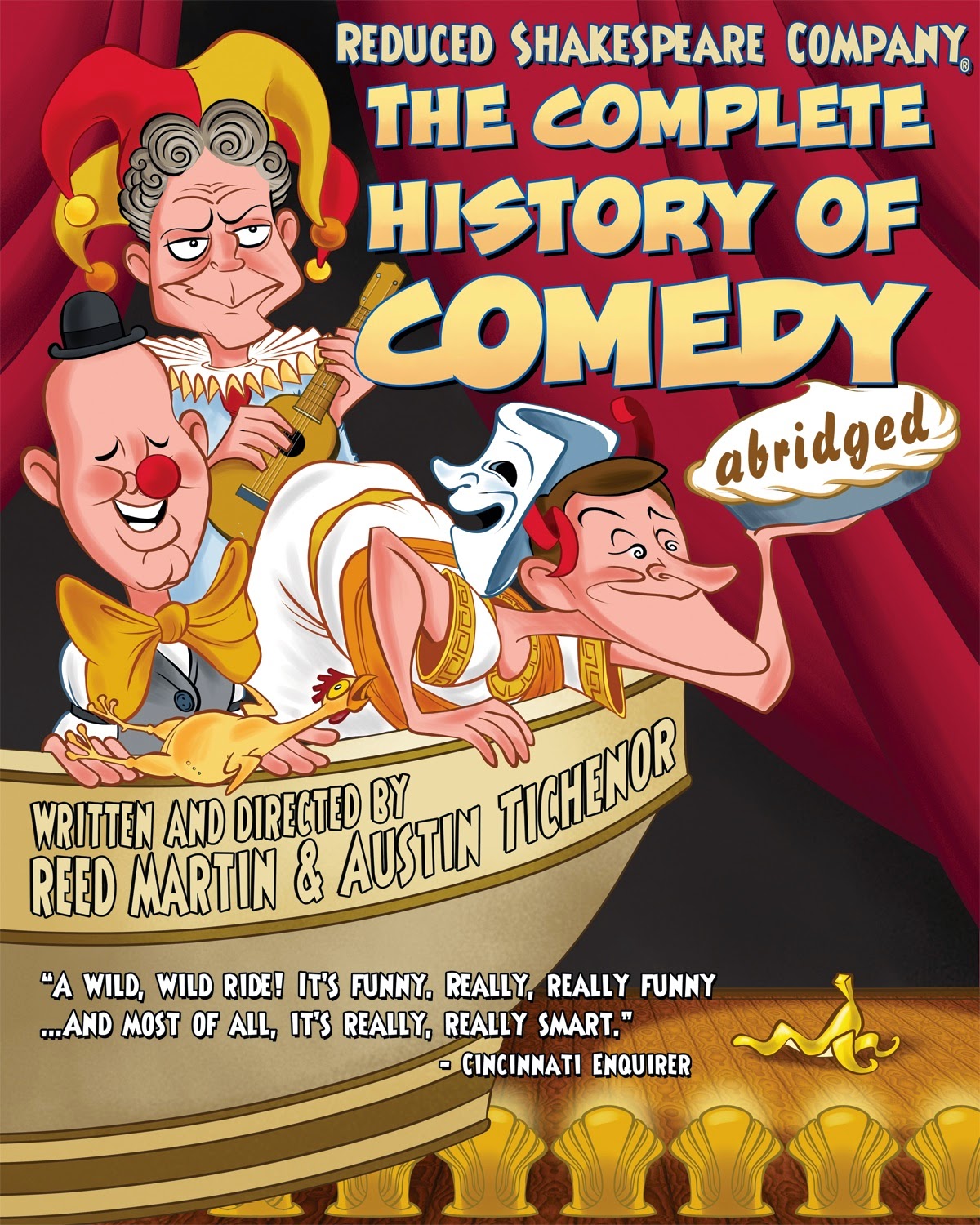 The Complete History of Comedy (Abridged).


It’s a great show, with the RSC’s usual combination of a razor-sharp survey of whatever subject they’re ostensibly skewering, disguised in laugh-till-it-hurts comedy, physical, satirical and intellectual. You can enjoy this show on multiple levels, and actually learn something about the development of the art and practice of comedy along the way. It’s at the Pleasance Grand until August 25, then touring the US, UK and Ireland, and I highly recommend it (here’s the schedule).

But I enjoyed it on a whole different level, too.

This was really my present and past colliding, as I have been going to see RSC shows since the genesis of the troupe at the California Renaissance Pleasure Faire, where the RSC’s first full-length show was written and for quite a long time performed by my friends (since college, eek!) Adam Long, Daniel Singer and Jess Winfield (who is also the author of My Name is Will, a brilliant novel of sex, drugs, and Shakespeare.)

And maybe when I say “present,” I really mean “future,” because along with working on Book 4 of the Huntress series, I’ve started on a new series which I’m going to set partly in Scotland.

I know. What could I possibly be thinking?

But it’s been very hard for me to envision a series that could follow (or run concurrent with) the Huntress/FBI thrillers.

This is a problem I now realize long-time authors face. Some readers will follow you anywhere. Myself, if I love an author, I read everything by that author: series, standalone, it doesn't matter. I may like some books better than others, but it’s the themes that an author is working with that really draw me, and authors bring their personal themes into every book they write.

Other readers, though, may be so specifically keen on certain aspects of a series - the characters, the genre mix, the level of suspense, the arena – that they may well not be interested in something different from that author.

And I have to admit there are a few of my favorite authors who have books or a series that I’ve just never been able to get into.

So the problem with deciding on a new series is how to write something that will sustain you creatively as an author (since we’re the ones who have to live in these worlds for years at a stretch) and that will hopefully also draw your readers who have become attached to the last series you wrote. Obviously there are also always commercial considerations, if you’re doing this for a living, as I am.

So I needed to find a series that has the depth and thematic resonance that I think the Huntress books have, and the range of interesting characters, and the locational aspect that I know my readers enjoy - the Huntress books are in one sense a road trip and California especially is a character in the novels.

So here I am living in Scotland. And people are jealous. I mean, I get death threats. Mostly people are kidding – I think – but Scotland is a fantasy to a lot of Americans, in lots of different ways.

As an American actually living here, I see both the fantasy and the reality (sort of reality). I think I can write about that really well, and bring my American readers into a fascinating and stunningly beautiful, mysterious world - in the context of a crime series that will allow me to explore different sides of my own personal theme: What can good people do about the evil in the world?

It’s an exciting thought… and terrifying. Like paralyzingly terrifying.

So watching the RSC show I realized what I was fretting was the enormity of doing this story justice (this is my eternal fret, actually). And a line leaped to mind - my favorite moment from the RSC’s Complete Works of Wm. Shakespeare (Abridged). My favorite moment in another show full of laugh-till-you're-sick moments comes just before the intermission, when Adam flat out refuses to go any further, because the one play left that the boys haven't yet butchered is Hamlet. And Adam just doesn't think he can do it justice (“There are just so many words…”).  Jess (now Austin) lifts a sobbing Adam from the floor, assuring him - "We don't have to do it justice. We just have to do it."

So authors – have you had the experience of having to follow up a successful series? How did you know when you had the right idea?

And readers – are you willing to follow a favorite author into a new series? Or would you rather your favorite authors stick to their tried-and-true characters?

I've added a new feature to my website: a monthly contest. You'll be able to enter for a chance to win signed books, audiobooks, gift cards, and other giveaways, which I intend to get pretty creative about. (For example, I have extra tickets to a showing of Benedict Cumberbatch in Hamlet, coming up next year....)

You can find contest news by clicking on the contests! link on the website nav bar (to the left), and/or you can sign up for another new feature, a monthly newsletter that will have the upcoming contests and freebies listed.

Posted by Alexandra Sokoloff at 4:33 AM

This is on an entirely different planetary scale than where you are at, but yes, the Doing It vs. Doing It Justice conflict continually rages. I wrote a complete 450-page first draft after giving Perfectionist Me permission to write garbage. Now I'm submitting rewrites to a writer's group I joined and to date have received rave reviews. Flattering! Yay! But it also adds pressure to do "justice" to every second draft rewrite and submission, despite knowing that there will be *many* subsequent layered edits coming. I must constantly force myself to DO and remind myself that the editor's chisel will provide the JUSTICE after.

Michael, I love it! Yes, DO IT first and JUSTICE after.

Alex, I think your new series idea sounds terrific, And I will love it. That doesn't mean I wouldn't feel the loss of a California road trip!

As to jealousy—who wouldn't be jealous? You get to live in Scotland!

Reine, that's sweet of you to say. I'm not retiring the Huntress series, but I am feeling the need to explore other worlds and characters as well.

And you know we'd love to see you here!

Alex, the next time I am headed over that way, I will be sure to call. xox

Hmmm... When I first started reading the post, I was going to comment how jealous I am that you live in Edinburgh. But... uh... never mind.

That's okay, Ken, I'd be jealous of me, too! On the other hand, I really could use subtitles.

It's interesting because I read this and I realize I feel the same way about starting a new project that I have never done before.

I realize that that is the real reason I haven't written on my story yet. Or, haven't pushed forward on some projects. I feel all together worried I won't do it justice. I feel worried. But what is it that they say about worry? Something about it being a rocking chair, it gives you something to do but it changes nothing. I guess worrying about not doing a good job is not the same as getting in there and trying it and going from there. Thanks for being so honest with your thoughts.

Stefanie, I feel your pain! One of the most important things you can ever do as a writer is surrender to the fact that IT WILL NEVER, EVER BE PERFECT.

I was in a theater group in college and after, and our motto was "Dare to be bad." It's really very liberating. Try it!