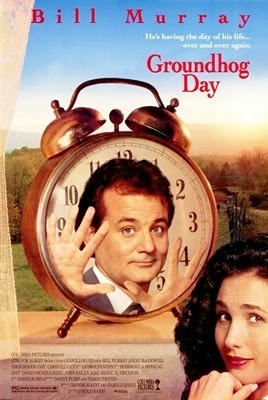 Before we get started with the Act II breakdown, I wanted to post this tribute to Harold Ramis by Stephen Tobolowsky. If you read nothing else, skip down to paragraph seven and read through about how the pencil breaking scene to test the rules of the world evolved. Just brilliant.

… and Phil wakes up in the B&B bed, to the same clock, the same song. This time he is elated, though. Downstairs, he asks the proprietress if the cops have been by looking for him, and when she says no, he kisses her. He announces “I’m not going to live by their rules anymore!” We see immediately his PLAN is to take every advantage of his new situation (and we’re already looking forward to what Bill Murray is going to do with this). (37 min.)

At the diner, Rita watches in disgust as Phil eats a huge spread of various full breakfasts and pastries, and then lights up a cigarette. She quotes Sir Walter Scott, “The Wretch” at him. Phil laughs: “You think I’m egocentric?” Rita replies, “I know you’re egocentric. It’s your defining characteristic.” (THE AWFUL TRUTH, and sets up CHARACTER ARC.) On the way out, Phil stops to talk to an attractive woman diner (Nancy) and asks a series of questions about where she went to high school and her English teacher’s name. We sense what’s coming.

Then next day, Phil finds Nancy at Gobbler’s Knob and pretends to recognize her from high school. She doesn’t know him but is convinced by the details he knows, and impressed that he’s a TV weatherman, and is happy to meet him later.

That night Phil makes out with Nancy in his room, but keeps calling her Rita.

Phil continues to take advantage of his situation; in a montage he uses his foreknowledge of events to steal money from a bank truck, buy a classic car, and seduce more women.

Now Phil turns his attention to Rita. He sabotages the van so he can get Rita for a whole day, and in a series of scenes, he takes several days — or maybe weeks — in a row to learn a great deal about her and refine his seduction story, feigning that her favorite drink is also his, that he wants the same lifestyle that she does, even learning to quote French poetry. (This is a wonderfully comic takeoff on the standard GETTING TO KNOW YOU scene and apparent cosmic synchronicities of romantic comedy — it’s all a complete game to Phil.)

Rita is suspicious of his attention (proving she’s the right person for him) but over a series of dates (actually, the same date) she starts to warm to him. Finally they have a genuinely beautiful night, with a spontaneous snowball fight and some real chemistry, even dancing in a gazebo.

Phil manages to charm Rita up to his room (54 min.), but there he becomes too aware of the rapidly ticking clock and comes on too strong. Rita is suddenly certain this has all been some kind of setup, and slaps him.

The next night Phil runs through the same sequence, trying to recreate the same magic, which of course he can’t. He becomes increasingly manic and desperate (with a hilarious takeoff on the GOSH, WOULDN’T WE MAKE GOOD PARENTS trope of romantic comedy) and Rita slaps him again.

Cut to a montage of slaps.

Phil finally walks home in the dark, past a lineup of ice sculptures of human-sized groundhogs (EXTERNALIZING HIS OPPONENT — or what he is coming to think of as his opponent. Also groundhog Phil is Phil’s DOPPELGANGER).

In the next days we see Phil starting to crack. He gives increasingly offensive newscasts on the festival. The alarm clock looms larger and larger and Phil destroys it again and again. (Great EXTERNALIZATION OF OPPONENT.) He’s given up.

(Also note that it is a very common technique in romantic comedy, as well as other genres, to open the second half of the film with a montage, to show passage of time, progression, or as here, that the protagonist is stuck.)

Rita is clearly concerned about him, sensing an emotional break. Phil in fact becomes convinced that this is all Phil the groundhog’s doing and kidnaps the other Phil (after bidding Rita an emotional goodbye: “Remember that we once had one beautiful night together.”). After a police chase, Phil drives into a quarry and drives the car off a cliff; it explodes, killing both Phils. But the next morning Phil wakes in bed again, whole. (1.05)

There follows a series of suicide attempts, none of which take. (A whole VISIT TO DEATH montage!) A devastated Rita identifies Phil at the morgue; Larry is delighted to comfort her. (1:06)
In the diner, Phil desperately tries to talk to Rita again. He takes her around the diner and tells her everything about everyone in it, and everything that’s going to happen. Then he tells her everything he knows about her. Then he writes down exactly what Larry is about to come in and say, which Larry does. Rita finally believes him. She says she’s going to spend the rest of the day with him as an objective witness to see what happens. (1.10)

Back in Phil’s room, they bond while tossing cards into a hat on the bed. Phil is a master at it — he’s spent the last six months learning how. Rita asks, “This is how you spend eternity?” (A nice nudge toward Phil’s eventual revelation.) Phil says the worst part is that tomorrow she’ll wake up and not remember any of this and treat him like he’s a jerk again. Rita says he’s not a jerk, but Phil admits “I am a jerk.” (CHARACTER GROWTH.) Rita says the situation might not be so bad: “Sometimes I wish I had a thousand lifetimes. Maybe it’s not a curse.” She snuggles up to him at midnight — then hits him when he doesn’t disappear. He says it doesn’t happen until 6 a.m. (even Phil’s MAGICAL HOUR is warped) — and asks her to stay. Platonically.

Phil reads poetry to Rita in bed as she falls asleep. Then he confesses to her that he thinks she’s wonderful. “I’ve never seen anyone that’s as nice to people as you are. The first time I saw you something happened to me … I knew that I wanted to hold you as hard as I could. I don’t deserve someone like you, but if I ever could, I swear I would love you for the rest of my life.”
(CONFESSION TO SLEEPING LOVED ONE.)

An interesting image here — the ice on the window looks like the eye of God, watching, and seeing Phil's growth.

If you find these story breakdowns helpful, you can find more in my Screenwriting Tricks for Authors workbooks. Different breakdowns in each book.

Posted by Alexandra Sokoloff at 3:37 AM

I've always thought this movie is as much a horror story as it is anything else.

BTW As a big fan of the HUNTRESS series, I'm wondering when book 3 will be published.

Sorry about the "anonymous", Alex. I forgot to tick all the boxes.

Hey Richard!!! So nice to hear from you.

I think it's a horror story for men, definitely. For once, not so much for women.

Book 3 is coming, thanks for asking - there's been a new wrinkle and I'll be making an announcement very soon.

Fantastic. I will be keeping this at hand, especially for outlining one particular play in my pipeline.

Your way of working through story is so useful because it recognizes that there are juicy elements we can and should make use of, but it's not narrowly prescriptive. And always fun to read, besides!