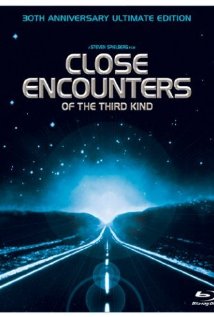 I don’t know what it is, but my family’s Christmas gatherings always seem to  involve aliens in some way. Possibly stems from all those years we spent road-tripping on (the former) Route 66.

This year it was watching CLOSE ENCOUNTERS OF THE THIRD KIND (again).

I haven’t seen the film in a while and it turns out to be a great example of a concept I’m always trying to get across to this college film class I’m teaching: act and sequence transitions. To get across the idea of the Three-Act, Eight Sequence structure, I show them films to illustrate that accomplished filmmakers often use a recurring image or device to indicate the end of one sequence and the beginning of another (not always for every sequence, but VERY frequently for the transitions between the four acts).

- The six stages of a con that set up the sequences of THE STING: The Set-Up, The Hook, The Take, The Wire, The Shut-Out and The Sting ... and which are delineated by still paintings on title cards.  (Yes, that’s just six – the first sequence is the incident that compels Hooker to want to do the long con to begin with, and the eighth is the wrap-up.)

- The old newsreel-style shots of the map of the globe with the superimposed plane flying and the red line marking the journey and the sequence transitions in RAIDERS OF THE LOST ARK.

Others are more subtle but easy to spot if you train yourself to look, like:

- The long overhead shots of Jamie Foxx’s cab cruising through the streets of L.A. between each sequence of COLLATERAL. (There are similar long shots of the spaceship Nostromo gliding silently through the vast emptiness of space that mark the sequence breaks in the first ALIEN)
-
- The shots of seasons (fall, winter, spring) and specific holiday decorations in the Great Hall that delineate the sequences and acts in HARRY POTTER AND THE SORCERER’S STONE.

- Another film I just love, THE PRINCESS BRIDE, cuts away from the main story of Westley and Buttercup to the framing story of the grandfather reading the book to his grandson at each sequence and act break - slyly demonstrating the power of cliffhangers.

- And in CLOSE ENCOUNTERS, after the climax of each sequence, there is a cut to a short scene of the team of scientists, led by a mouth-watering François Truffaut (just saying) racing to yet another spot on the globe to investigate another UFO sighting.  These scenes appear every fifteen minutes like clockwork – not as blatant as still shots and title cards, but equally effective as the demarcation between sequences and acts.

Personally, I just love how these bridges, or markers, or transitions, or whatever you feel like calling them, create a symmetry and forward momentum to a story. It signals an audience that the story is moving into a different phase, and gives the audience a chance to take a breath and mentally prepare, even for a second, for the next stage of the journey.

I’m bringing this up today because we’re talking about rewriting tricks and techniques, and I think it’s really useful to train yourself to look for how your favorite storytellers might be using these transitions, on screen and on the page. It will get you thinking about how you might use some kind of bridge scene yourself. It’s not that you HAVE to do it, not at all!  But maybe there’s a hint of some perfect recurring transition scene already in your first draft that you can build on to create a whole series of transitions that will give your story that perfect symmetry and momentum.

Something to think about!

So do you have any examples for me?

And Happy New Year to everyone!  May all your writing dreams come true this year.

If you're a romance writer, or have a strong love plot or subplot in your novel or script, then Writing Love: Screenwriting Tricks II is an expanded version of the first workbook with a special emphasis on love stories.

Posted by Alexandra Sokoloff at 8:28 AM

Hi Alex
As always, thanks for the Post.
I wrote a short story over the last month or so, for a contest. It's only 3000 words.
The story refers to golf, and it's a romance. Having just read this post of yours, I realize about 3 times in the story, I 'bridge' back to mention/discussion of this particular set of golf clubs, as a break between segments that (hopefully) build the romance between characters. I wonder if what you describe as scene bridges, hold true way down to short stories too?
Thanks.
Lily M.

Thanks, Tony! Haven't seen you for a while - hope you're having a great new year so far.

Hey Lily - absolutely, that sounds like a classic curtain or bridge that you worked into your story, and I think that it's maybe even more important in short stories to do this kind of thing to create a solid structure. Well done, you!!