One of the things I most love about e publishing is the absolute flexibility and speed of it.

You all know I've been toiling away on my sequel to Huntress Moon - I'd hoped to have Blood Moon out this month, but I WOULD have to be writing a police procedural where forensics have to be - well, not perfect, but realistic. It's just taking longer than I thought.

But that's okay. A great thing about e publishing is that I CAN take that time, and know when I do release the book it is the book I want it to be.

In the meantime, I have two more e books I've put together this month, just in time to load up that holiday e reader that I'm sure Santa is bringing everyone this year.

Yes, you read that right - I put together two more books this month.

Because once you get the hang of it, that's not just possible with e publishing, it's sort of what e publishing is all about.

Both of these books can be classified as part of an e publishing phenom called the boxed set, and you need the visual to see what I mean.

First, I’ve put together this boxed set of three of my spooky thrillers called Haunted. It contains the full texts of The Harrowing, The Unseen, and Book of Shadows. Anyone who doesn’t already have these books can now get them all for just $5.99, and give themselves or special friends nightmares for days!  It's a great deal on the books, and they're all in one place on your e reader (which in itself is a reason I find myself buying more and more boxed sets).  And for me, it's another way to catch a reader's eye. I think the 3-D look of the boxed set stands out on a page, and compels a browsing reader to give the book a second look. 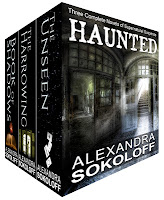 And I also have a brand new anthology out this weekend: Apocalypse: Year Zero, with four end-of-the-world novellas by me and my award-winning dark fantasy friends Sarah Langan, Sarah Pinborough, and Rhodi Hawk. We cover 9/11, tsunamis, Hurricane Katrina, and The Big One — as well as, in no particular order, Hollywood, sex, rage, and the Four Horsemen, who turn out to be not men at all.
(So if like so many people you feel a little let down by yesterday's non-Apocalpyse, no worries - we’ve got you covered!). 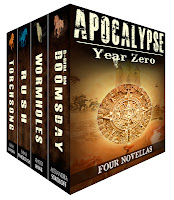 
Now obviously, this whole collection of novellas didn't magically write itself overnight. This is something that my very good friends Sarah, Sarah, Rhodi and I have been cooking up ever since we were first thrown together on a panel at the World Horror Conference in Toronto. Women are scarce in the horror genre and we have a very different take on the genre than men do. As I've said here before, women have to live with horror on a much more intimate, daily basis than most men (in non-warring countries) will ever have to, and that intimacy is reflected in our writing.
The four of us bonded immediately, and have enjoyed each other's company whenever we can ever since. We've appeared together at different conferences and bookstore and library signings and panels, and Sarah Langan, Rhodi Hawk and I had the immense fun of doing a mini tour together through the Southwest (you can watch the three of us on a Poisoned Pen panel here).in four separate novellas.


In a promotional sense, teaming up with other authors this way can be really productive. It's more cost-effective and a hell of a lot more fun to tour together. And - especially for women writing in a male-dominated genre - I think it's been helpful for us to share the limelight. At the end of this blog I've included some excerpts of what the American Library Association has to say about us in its Readers' Advisory Guide - if you take a look, I think you can see the practical effects of that limelight.

It was pretty inevitable that we'd decide to collaborate. Apocalypse was conceived first as a graphic novel, but it turns out that the best way to protect your underlying rights to a graphic novel is to start with a book, first.  But writing a novel with three other people who have, you know, actual LIVES, is a daunting task, so what we did instead was create an umbrella story that would give us a format to write four separate novellas, each exploring the origins of four main characters, urban fantasy antiheroines who are forced into superheroine status through four apocalyptic disasters.

While we were writing, though, the publishing industry sort of - imploded - and  I convinced the others that we could very probably do better for this collection by e publishing it. Also, this way, our rights are completely unencumbered if we do decide to do a graphic novel.


All these two boxed sets cost to put out were the formatting and cover design fees, which are about what I make from ONE e book every month.  After that, it's pure profit, and it gives readers another option for reading. The format is eye-catching, and might attract people to try a book just for the novelty of it.
And it gives an author what Joe Konrath calls "shelf space": every book you have out gives you more exposure, a visual demonstration to a reader that you're a solid presence, not a one-hit wonder.

So I'm curious - are you familiar with this phenomenon of the boxed set?  Authors, have you, or do you see how you might, put together a boxed set of your own to give your readers another option for reading your books?

Readers, do you like/buy boxed sets?

Hope you had a great Solstice - that energy is still very powerful for a few days after, so make your wishes now!

From The American Library Association's Readers' Advisory Guide to Horror:

Ladies of the Night

Horror is still a widely male-dominated world, but that does not mean there aren't good female writers producing top-notch horror, namely Sarah Langan, Alexandra Sokoloff and... Sarah Pinborough. What unites these women is more than their gender; they are all known for creating entertaining, terror-inducing novels, but with a lighter touch. The horror here is quiet. There can be gruesome scenes, but it is the creation of the unsettling atmosphere that rules the works of these women.

Full text here
Posted by Alexandra Sokoloff at 9:50 AM