Femme Noir (The Next Big Thing)

I’ve professed my undying love for Bouchercon, the World Mystery Convention, many a time on this blog, but I do have a serious beef with this year’s line up.

The noir panel was all men.

I mean, really? In 2012?  When Megan Abbott and Kelli Stanley and Cornelia Read are attending? When Christa Faust is not only in the room, but up for an Anthony?

I guess all the women were stuck in binders or something.

(Kudos to the one panelist, John Rector, who knows a little about noir himself,  who jumped to point this absence out.)

Bouchercon was over a month ago and this noir sans femme thing is still rankling me, so I decided to blog about it.

This is also partly because I was asked (multiple times) to take part in the latest author blog hop, The Next Big Thing, in which authors post their answers to a set of ten questions about their latest books on their blogs and then tag five more authors for the next week, and possibly Kevin Bacon is involved, and then we take over the world.

So my horror/thriller author pal, the wildly dark, or darkly wild, Sarah Pinborough, tagged me two weeks ago, and I did my ten question interview on Huntress Moon last week - here -  and now it’s my turn to tag five authors and link to their interviews this week.

And because I am still seething over the noir panel, I chose a theme of fantastic dark female characters, and tagged my authors accordingly:

- Michelle Gagnon is a thriller writer who has recently brought her powerhouse female perspective and adrenaline-charged storytelling to the YA thriller genre with her latest, Don't Turn Around. Noa is a terrific teenage role model; I hope we'll see more of her.  Read her Q & A here 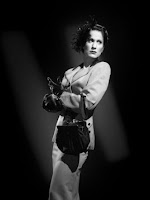 - Christa Faust knows noir backward and forward, and has virtually created a whole new direction for the genre and its characters. Angel Dare is an alt heroine who brings OUT everything that noir anti-heroines like Gloria Grahame were doing in a coded sense, and Butch Fatale takes the "two-fisted detective" archetype to a new meaning.  Read her Q & A here

- Wallace Stroby. As anyone who reads this blog knows, I am VERY picky about men writing "strong women", and on the dark side, Stroby is as good as it gets, both shattering and reversing noir gender stereotypes. His Crissa Stone series presents a thief who doesn't just hold her own, but leads and controls motley collections of doomed male gangsters. And I'm even more fond of Stroby's Sara Cross, who mirrors the classic noir paradigm: she's a truly good woman whose near-fatal flaw is a tragically bad man. Read his Q & A here

- Zoe Sharp actually DOES write a kick-ass female lead, Charlie Fox, who works as a bodyguard and makes the physical reality of her job perfectly plausible (I've learned a lot about self-defense from these two...) while she battles uniquely feminine psychological demons. And her new installment in the Charlie series is set in New Orleans! http://zoesharp.com/


(Right, that’s only four.  I can count, at least up to ten, but getting authors to do anything on deadline is like herding cats.)

I really encourage you all to click through to their interviews, especially for the fun question on who they would cast in a film or TV version of their books. Always a good exercise for any writer, you might get inspired!

So not everyone above is writing noir, exactly. Stroby, definitely. Faust has a lot of noir influence but I’d say her work is more like female-driven pulp, with a strong emphasis on camp humor, too. Sharp and Gagnon write dark and intense, but it’s not noir any more than I’m writing noir, which is not at all.

I’m also no way a noir scholar, and let’s face it, the lines are blurry (Is it noir? Pulp? Neo-noir? Just a good old B movie?) and I’d like to leave the question open for everyone to jump in and define it for us in their own words.  Personally, I know it when I see it!  No, really - for me, the key difference is that, for example, in Zoe’s and Michelle’s story worlds, there is the possibility and even probability of redemption, while in the classic world of noir, there is none, or very little. Doom and fate figure predominantly.

I liked John Rector’s capsule summation on that B'Con panel: “Noir pushes people to extreme circumstances and there is no happy ending. The hero/ine is fighting the good fight... but loses.”

So I guess the personal line I draw between “noir” and “dark” is about that possibility of redemption and at least temporary triumph. You can win the battle even when you know the war rages on. In my own books, there’s plenty of dark, but not noir’s overwhelming sense of inexorable fate; my own themes are more about the people caught up in a spiritual battle between good and evil. And no matter how dark it gets, there’s always the presence of good.

In fact, some of my favorite dark thriller writers: Denise Mina, Tana French, Mo Hayder, Karin Slaughter, Val McDermid, seem to me more fixed on exploring that spiritual evil than fate. As dark as they get, I wouldn’t call what they’re writing “noir”, because it IS more spiritual, they’re dealing with a more cosmic evil.  Or maybe the evil they depict is so rooted in a feminine consciousness and feminine fears and demons that it doesn’t FEEL like noir. But that could be me splitting hairs, you tell me! That’s what this blog is about.

And there’s another element that I consider classic noir:

But the presence of shadowy – or maybe the word I mean is shaded – women is key. For my money some of the most interesting women ever put to page or celluoid are noir femmes, and part of that is because quite a few noir writers and filmmakers and actresses actually made a point of exploring the dark sides of women.

And noir takes on significantly different meaning when the leading roles are played by women instead of men. These days Sara Gran, Megan Abbott, Gillian Flynn, Christa Faust and Wallace Stroby are all doing really exciting work genre-bending by putting women in the protagonist’s seat and then absolutely committing to what it would look like and feel like and mean for a woman to take that lead in circumstances we don't usually see women in.

I was enthralled by Sara Gran’s Dope, which explores a noir standard, addiction, and the noir paradigm of the tarnished white knight committed to a hopeless and destructive person - all from a completely feminine point of view. Likewise Wallace Stroby’s Sara Cross (in Gone Til November) is a committed knight... lawman... lawperson... who very nearly falls because of a fatally seductive man, and any woman who’s ever been tempted will understand her struggle.

Gran has created another classic yet entirely unique noir heroine in her latest, Claire DeWitt and the City of the Dead; I can’t think of another noir character so reliant on my favorite force in the world: synchronicity. But also, back to addiction: is that synchronicity drug-induced?  Claire’s pot habit might be useful juice for her detecting instincts, but one gets the feeling it’s playing hell with her personal life.

Megan Abbott layers a specifically feminine addiction, the pathological narcissism that anorexia can be, into her latest, Dare Me - to chilling effect. And I’ve never seen anyone else portray the feminine counterpart of criminally sociopathic male athletes, but you better believe these cheerleaders are exactly that.

Abbott, Gran and Flynn (in Sharp Objects) are also sometimes writing female protagonists battling female antagonists, with men relegated to secondary roles. I find it a deliriously welcome reversal of the traditional order.

I suspect it's easier, or really I mean more natural, for women to achieve a genre bend with noir and thrillers because we're working against a very entrenched male tradition. If we're just fully ourselves, it's going to look new to the genre.

But men can get there. I think Dennis Lehane did a brilliant genre bend with his male characters in Mystic River by going places that men don't usually go in their own psyches  - they'd rather assign that scary stuff to female characters to distance themselves from the experience instead of having to put themselves into those vulnerable positions. Which  personally I think is cheating.

And as Stroby is proving, consciously committing to the physical and emotional reality of a shaded female protagonist is possible for a male author, too.

By looking at crime through a specifically feminine lens, these authors are creating a new genre. I don’t know what to call it, but I know I love it.

And I know there are more of these authors and books out there, and I want to hear about them, so let’s have it. Who are your favorite dark female leads – and villains? Which authors in our genre do you think are portraying ALL the facets of women, black, white, and every shade of gray in between?

And yes, what is your definition of noir?  I'd love to know.

Posted by Alexandra Sokoloff at 9:53 PM

I'd rather add some names and books to the discussion if I may.

Also, I found this quote recently that I just love: "You take a regular character and you put them into a situation that is abnormal and you tell that slice of their life.”

I love Elizabeth Hand! I keep forgetting I have Generation Loss, thanks for the reminder.

I haven't read any of the others, will have to investigate. Thanks, Brian.

I don't know much about noir, but I'll definitely be checking out some of these suggestions here.

Thanks, Girl! You won't regret it.

Vicki Hendricks and Miami Purity-very down and dirty crime fiction.

I tend to think of noir not so much in terms of outcome, though it's often grim for our hero/ine, but more in terms of moral ambiguity in all the characters, even the landscape. I don't know if this is correct in a lit-crit sense, but it's how I characterize noir in my own thoughts.

Perhaps 'noirish' is a useful qualifier.

Thanks so much for standing up for the sisters.

Hey Chris! Thank YOU. Especially with noir, which traditionally has such feminine undercurrents, it just rankled me.

You're right, Vicki Hendricks is great, and I heard someone mentioning her in the audience after the panel.