Rage Against the Night

One of the things no one ever tells you about being an author is that people ask you to write short stories. Anthology editors, other authors, publishers, blogmates. To which my usual response is - Are you KIDDING ME? Do you KNOW how hard it is to write a short story?

But the thing I've discovered about short stories is that, just like novels, and unlike screenplays, once you get through the hell of writing them -- I mean, once those stories exist —— they're forever, and they have value. You can even donate them to worthy causes, hopefully to do some good.

I know I have some horror readers and writers here. Others of you are - not. So I want to introduce you to someone that anyone in the horror community knows, and everyone else should know.

Rocky Wood is the current president of the Horror Writers Association, and the author of Stephen King: Uncollected, Unpublished, Stephen King: The Non-Fiction, Stephen King: A Literary Companion, and Horrors: Great Stories of Fear and Their Creators.

Rocky is a born New Zealander, current Australian, and believe me, Hugh Jackman and Russell Crowe have nothing on him. They so very seldom make men like this anymore, it’s tragic. If there’s any point of cloning at all it should be to make more of these.

First of all, there’s that accent. But that’s just window dressing, really.

He is charming in the way that the most charismatic movie stars I’ve met, and I've met a few, are charming. He is totally present and focused in exactly the moment he is in, and on the person or group he is with. He has an aura that is sexy and smart and just beyond what you see in the real world.

You are drawn to the accent and his intensity, first, and the charisma, and then you very quickly start to realize that this is a wonderful person. An exceptional person. That whatever you thought you were rushing off to do can wait, possibly forever, because you really need to be right here and just find out who this person is.

All right, here comes the hard part. And if you’re not sitting down, maybe you should, because when I say hard, I mean hard.

Rocky was diagnosed last year with ALS, otherwise known as Lou Gehrig’s disease, or Motor Neurone disease. It is an evil, insidious thing. It paralyzes the body entire while the mind remains fully functioning. There is at present no cure.

The news of this, this year, made me want to take whatever pills that would get me out of this life as fast as I could exit it. It made me wonder what was the point of anything at all.

Horrible things happen to good people all the time. No one can tell me that there is not actual evil in the world.

But this is one of those – THE PERSON WHO LEAST DESERVES THIS SCOURGE – events.

So what is anyone to make of something like this?

Believe it or not, I’m not going to be dark about it. I had that phase a while ago. I’ve moved on, to two basic thoughts. Which actually might be in opposition, but here they are anyway.

1. The perfect cure can happen instantly, tomorrow, this afternoon, this second. Miracles happen. Not consistently, but they happen. As I wrote in THE PRICE, and as I believe (on good days): “If one miracle has ever happened in the world, why not this one, for you?”

2. Another, and possibly the more important point is that: this world is only illusion. What you feel, what you can touch, right now, it’s only illusion. There is a better state we pass on to, which to me is—pure energy. Without the heaviness of a body. Without the agony of what people do to each other on the earth plane.

Don’t get me wrong, I love my body, it gives me great pleasure, and I’m happy to know that it gives other people great pleasure. But it’s so very heavy. I have to think that there is a lighter kind of existence, and that it’s a much better existence. I do enough yoga to believe that, with every cell and neuron in me.

And if this is true, there is something beyond the horror of a fatal disease. Anything that is what the Hindus call Moksha: liberation, release from the earth plane, is ultimately a blessing.

But since we’re still on this plane, and these things have real world consequences, a bunch of Rocky’s friends, who happen to be pretty incredibly great writers, have contributed a passel of short stories to a collection called RAGE AGAINST THE NIGHT, edited by Shane Jiraiya Cummings, with short stories by some of my all-time favorite dark writers: Stephen King, Ramsey Campbell, Peter Straub, F. Paul Wilson, Chelsea Quinn Yarbro, Sarah Langan, Scott Nicholson, and many more. My story, The Edge of Seventeen, is reprinted in the book, too. You may be especially interested in a story by Stephen King, which details a deal with the devil that Rocky would never make: passing this kind of illness on to another human being.

The price is $3.99, and all proceeds go to buying Rocky an eye gaze machine, a miraculous device that allows which allows the severely physically impaired to communicate via eye movements.

Rocky has already made arrangements to pass the machine on to another family that needs it, because that’s the kind of man he is.

No one knows what will happen tomorrow. I may drop dead long before Rocky does. Any one of us could. What I do know is that anyone who has not known this man is the poorer for it. I hope this post will go a small way toward correcting that.

Thank you for reading. 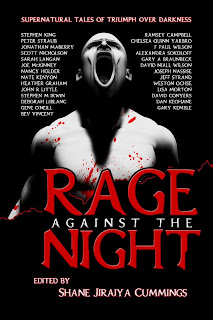 RAGE AGAINST THE NIGHT:

Under the onslaught of supernatural evil, the acts of good people can seem insignificant, but a courageous few stand apart. These brave men and women stand up to the darkness, stare it right in the eye, and give it the finger. These are the stories of those who rage against the night, stories of triumph, sacrifice, and bravery in the face of overwhelming evil.


Table of Contents (in order of appearance):

· The Edge of Seventeen—Alexandra Sokoloff

· The View from the Top—Bev Vincent

· Afterward, There Will Be a Hallway—Gary A. Braunbeck

Wow, how horribly tragic. It's not fair that such terrible things happen to such good people.

Thanks Alex, on my way to Amazon now.

I was looking for a new read. This is an amazing lineup of authors and your respect and affection for your friend shine through, Alex. How can I resist.

Jenni, you're right, there's nothing fair about it. Obviously these things be reserved for child molesters and those racist bankers who pushed subprime loans on unsuspecting first time home buyers.

Sheri, thanks so much. Yes, amazing people all around - you too!

Although I'm not big on horror stories (but I am big on your blog and writing advice), I headed straight over to Amazon after reading this posting.

What you and your fellow authors are doing is a real mitzvah. Please give Rocky my best wishes. We might pray for a miracle, we cannot change the course of his life, but we can give support along the way.

I have a few others I could include in that group - war profiteers and the politicians who love them, etc. :)

I bought the book. Thanks for your insights - I agree, to a large extent, with your view on energy transformations and the life cycle. It's easy to get caught up with the ills of the world, but in the end, it is all illusion, as you say. :}

Phillip, thanks so much for your support and your thoughts. Kindness is light-bringing.

I have a friend who went through this, her courage was uplifting and I only wish that I can live my life with as much dignity. Purchasing the book seems too little, so I shall be twittering and posting this everywhere as well.

Rory, thanks so much for spreading the word. As you obviously know, nothing seems like enough...

Brava for posting this.

Alexandra, I am so touched by this post. And I am in complete agreement with you about the whole illusion thing. I truly believe that's the case.
I see unfair things happen to wonderful people all the time since the birth of my son who has a life-limited condition. There's no way to reason any of this out. I am off to buy the anthology today. I'd be happy to direct more traffic to your blog, as well.

I so love that I found your blog a few weeks ago, and just want to let you know - this post? Well, I am buying Rage Against the Night. Enough said.

Susan, thank you, and I can't begin to say how sorry I am about your son. You couldn't be more right that there's no way to reason this out.

We all have a life-limited condition, don't we?

Jonathan, hi - and thanks so much for your contribution to the book.

Denny, glad you found us! Hope you jump in, and thanks so much for supporting the book.