THE UNSEEN - out in the UK today! 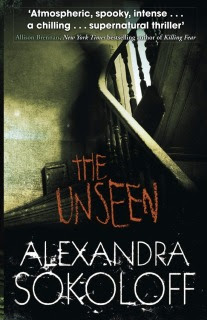 Amazing, ANOTHER book release! My poltergeist thriller The Unseen comes out in the UK today, with probably my favorite cover ever. It actually gave me a bad nightmare, and I almost never have nightmares.

The Unseen is a spooky thriller that crosses mystery and the supernatural, with some romance, too, this time. Yes, my genre identity issues are alive and well in this one.


Most people are aware of Dr. Rhine’s ESP studies with Zener cards.

Not so many people know that in the 1960’s Duke researchers also conducted field studies of poltergeists.

Poltergeists! I've always been fascinated by them. I mean, what even are they?

This story percolated in me for a long time (I've been pretty much obsessed with the idea of ESP testing since I was seven or eight years old), and I was able to do some very cool research for this one, including ghost hunts and a stay in a seriously haunted mansion that I used as the model for my poltergeist house. I'm going to talk about all of that more this week... in the meantime you can read an excerpt on my website, or just order it from Amazon UK.

"This spine-tingling story has every indication of becoming a horror classic... a chillingly dark look into the unknown."

"Sokoloff has provided a new and interesting twist to the genre, one that will stay with the reader long after the book has been read… the hair on the back of my neck may never lie down."

"One of the better books I've read this year... sure to please readers with the most discerning taste."

Posted by Alexandra Sokoloff at 7:19 AM

I downloaded The Unseen and can't wait to start reading it.

Fascinating the places your research takes you! I would love to hear more about that aspect of the novel.

Thanks, Jenni! Hope you like it. I was thinking I should post the story of the research on this one, it's great stuff. Thanks for the nudge.

Yay for you! Though boo for my wallet. Great...now I can't decide between yay or boo.

Awesome cover. After all this, does a new book still get you all excited? You never get tired of it, right?

Congratulations Alexandra! And you are one brave researcher :)

There's always the library, Alleged! I e mailed you.

Thanks, Joylene, and yes, all new books still get me excited - as soon as I start getting reader e mail about them. That's what makes it real. But that cover helps!

Thanks, Manreet. This one really did entail some perilous research.

grats on the brit pub, alex; the cover rocks, like you say!

sounds like my kinda book... cuz...
back in the day, i had it all planned out: i'd be a psych major, get my master's in parapsychology at duke, then a phd at the university of utrecht, in the netherlands [is that a great name for a country to study paranormal stuff in, or what?]... and get into some neat studies... then life interfered... though i did manage stage one, and became a psych major... ::sigh::