Book of Shadows, out today! 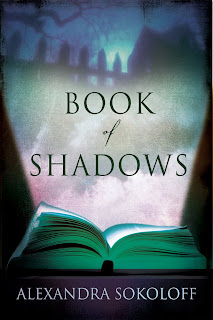 I know, I've been off for a couple of weeks. That's because I have a new book, out today, and it's been just a little crazy.

My favorite book that I've written so far:

Homicide detective Adam Garrett is already a rising star in the Boston police department when he and his cynical partner, Carl Landauer, catch a horrifying case that could make their careers: the ritualistic murder of a wealthy college girl that appears to have Satanic elements.

The partners make a quick arrest when all evidence points to another student, a troubled musician in a Goth band who was either dating or stalking the murdered girl. But Garrett's case is turned upside down when beautiful, mysterious Tanith Cabarrus, a practicing witch from nearby Salem, walks into the homicide bureau and insists that the real perpetrator is still at large. Tanith claims to have had psychic visions that the killer has ritually sacrificed other teenagers in his attempts to summon a powerful, ancient demon.

All Garrett's beliefs about the nature of reality will be tested as he is forced to team up with a woman he is fiercely attracted to but cannot trust, in a race to uncover a psychotic killer before he strikes again.

Order from your favorite independent bookstore

"A wonderfully dark thriller with amazing is-it-isn't-it suspense all the way to the end. Highly recommended."

"Compelling, frightening and exceptionally well-written, Book of Shadows is destined to become another hit for acclaimed horror and suspense writer Sokoloff. The incredibly tense plot and mysterious characters will keep readers up late at night, jumping at every sound, and turning the pages until they've devoured the book."

"As usual, Sokoloff does a good job keeping the reader guessing whether a supernatural agency is really at work."

"Fast-paced with strong characterizations, fans will enjoy this superb thriller, as Adam and the audience wonder if The Unseen could be the killer."

- Genre Go Round
Posted by Alexandra Sokoloff at 5:34 AM

I'm definitely going to read this. I read The Harrowing and the Price in about a week, and they were fascinating, so I have high hopes for this one. I've done a fair amount of research into witchcraft, so this will (hopefully) be even better.

Fantastic Alexandra! I look forward to reading your new book!

It's good when you've got that 'thing got done' feeling isn't it?

I just wrapped up the first draft of my sixth manuscript tonight and am now a bit 'Wuh? What next?'. Give me a day and I will answer myself with 'Oh yeah, next project.....' ;-)

OMG! I can't believe it's already time for this book to come out!! Wow. Guess I'm making a trip to Powell's tomorrow! :)

Elfarmy, if you liked those two and are interested in witchcraft, you will love this one, I'm sure!

And Greg, I swear, you make me feel like a slacker. Congrats on finishing that new first draft. What a relief, is right.

Oh, Wendy, I'm jealous, Powell's is such a great store. Have to make it up there again soon.