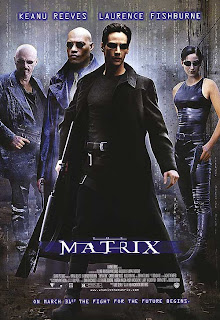 ACT ONE BREAKDOWN is here.

Neo is left alone with Tank, whom he notices has no plugs in his flesh. Tank explains that’s because he and his brother Dozer were born free in Zion: Zion is the last free human city – and this is what is at STAKE. The agents are looking for it to destroy it.

There is more thematic dialogue here with Tank (is Neo or is Neo not the One?): “Goddamn, I...I gotta tell you, I'm fairly excited to see what you're capable of, if Morpheus is right and all...We're not supposed to talk about this, but if you are...Damn, it's a very exciting time.”

Tank fixes Neo up with a combat simulation program – he is strapped into a chair, and first a headset loads a Jujitsu program into his head, then Kung Fu. There is some very skillful humor here (“Jujitsu? I’m gonna learn Jujitsu?”) that improbably makes us accept that Neo is required to use martial arts against the agents of the Matrix.

After ten hours of programming (which is apparently a big turn on), Neo is plunged into a virtual reality martial arts studio to test his new techniques by fighting Morpheus (Laurence Fishburne being a martial arts sex god) who of course creams him. In this scene is a brilliant PLANT of Morpheus taking a judo stance and then beckoning Neo with his hand – a totally hot, arrogant taunt that just seems to be throwaway character humor but will be a huge payoff moment later.

The other crew members gather around Neo (whose body is strapped in a simulation chair while he fights in virtual reality) to watch the fight. All have a huge stake in Neo actually being the One – but most seem to doubt Morpheus’ faith.

Inside the program, Morpheus tells Neo that it’s all about his mind – Neo is faster than he’s being, and he knows it. “I'm trying to free your mind, Neo...but I can only show you the door. _You're_ the one that has to walk through it.”

In the program, Neo is required to make a jump off a skyscraper to the next building. Tank says “Everyone fails the jump the first time” – but the others watch nervously as if this is going to prove that Neo is the One or not. Trinity is watching with held breath. Neo freaks out at the jump as he did on the scaffolding in an earlier scene, and crashes to the ground. If he had been in the Matrix, he would be dead. Cypher looks up from the program to see Trinity has left the room without comment (she doubts Neo).

The last program is an ordinary city street where Morpheus tells Neo that anyone he sees could be an agent (including a hot woman in red who morphs into an agent). Morpheus also warns that no one who has gone up against an agent has survived, but it cam be done, because the agents operate in a system based on rules.

(SET UP dialogue for climactic battle:)

Neo: What are you trying to tell me? That I can...dodge bullets?

Their dialogue is interrupted by an encounter with sentinels on the ship. Neo and Morpheus come out of the program, but the sentinels pass by outside. (FALSE SCARE – see, even the Wachowskis do it). (55 min).

- Cypher accosts Trinity in the corridor outside Neo’s room. She has been bringing Neo dinner, and Cypher is obviously jealous of Trinity’s interest in Neo. (Some motivation for Cypher’s betrayal.).

- Late that night, Neo is wandering the ship and comes across Cypher at a computer screen, monitoring the Matrix. Cypher offers him a drink of homemade rotgut that leaves Neo gasping.

The barbed dialogue has a lot of subtext: here, Cypher lays out his own motivation for the betrayal which will come in the next scene:

Cypher : You know, I know what you're thinking, because right now I'm thinking the same thing. Actually, I've been thinking it ever since I _got_ here....Why, oh _why_, didn't I take..the _blue_ pill.

Cypher: So, you're here to save the world...what do you _say_ to something like that?! A little piece of advice..you see an agent - you do what _we_ do. Run...you run your ass off.

And I may be really reaching here, but the drink that Cypher offers Neo seems like a reference to the cup Jesus asks to be taken from him at Gethsemane.

Next we see Cypher eating a steak at a table in an elegant restaurant. Across from him is Agent Smith, who is reiterating the terms of their deal: Cypher will deliver Morpheus to them so they can get the access codes to the city of Zion from him (torture is implied). In return, Cypher is asking to be inserted back into his life-support pod and will forget everything he knows about actual reality – he will live in oblivion in the Matrix again.

Cypher of course is Judas, here, and he is also rejecting the burden of enlightenment and choosing to go back to sleep, to the world of illusion.

This played for me as the MIDPOINT – a quiet scene but a huge REVEAL. It’s an interesting game-changer because the other characters don’t realize the game has been changed – only the audience does. But that of course raises the stakes for us enormously – we know the danger and can’t communicate it to our heroes.

Others may disagree with me and include the next 12-minute ORACLE SEQUENCE in the first half of the film, and say that huge reveal is the midpoint. To me, the Oracle sequence is so juicy it should just be its own movie. I'd like to live in that movie, as a matter of fact.

Posted by Alexandra Sokoloff at 10:44 AM

I love that you're putting in the time to dissect The Matrix--your insight is a huge help to me in understanding how to make my own manuscript shine.

There's so much to learn from your posts. Thanks.

Thanks,Fleur and Charlaine. The Matrix is being especially interesting for me to analyze - it is so rich in symbolic meaning, and also solves so many tricky story problems so deftly.

I'll be revisiting this film over and over again.

while i loved matrix 1 and most of 2, the 3rd left me totally disappointed, as if the first two were a setup for the big fail at the end; like the writers shot their load too early and had no real good way to conclude the trilogy...

I'm going to see Sherlock tonight and then look to do a dissection of the acts like this. It'll be the first time I've watched a new film with your breakdowns in mind, which should be interesting!