I'm off to Columbus today for the Romantic Times Booklovers Convention and – even though some of you have heard me sing RT’s praises before, I have to do it again. 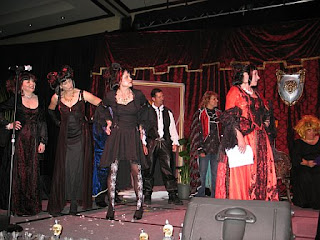 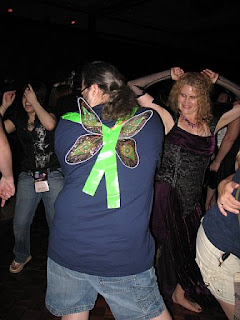 I used to tell people that if you’re writing balls-out horror, RT is not the place for you. But Joe Konrath/Jack Kilborn was there last year with his book, AFRAID, and while I did not check his actual sales figures, it looked to me that he was doing pretty damn well. And having a hell of a good time, too. (That's Joe dancing with me at the Faery Ball, getting into the spirit of the thing with his wings).

I am frankly staggered at how smart and eclectic this genre is about marketing and promotion – and craft. RT really works to recruit and organize mystery and thriller authors to present workshops and panels on those genres. The conference also features some unique ways of handling reader/author interaction. Apart from outside bookseller events, there is only one mass signing – that takes place in a HUGE convention room on Saturday, after all the authors have already done their panels. The book fair is heavily promoted to the community, on radio, TV and in print, and lots of readers turn up just for that. The authors are lined up alphabetically at long rows of tables, and the readers just walk up and down the aisles. There are drawings for dozens of author-donated gift baskets going on throughout the whole three hour signing, and video screens project book trailers through the whole event as well (I love having my book trailers playing in the book room and on the hotel TV during the convention. And yeah, you bet that sold books for me last year, and beyond that, it was putting my name and my book titles out there for the entire convention, so that even people who would never buy what I write are now aware of me as an author.). 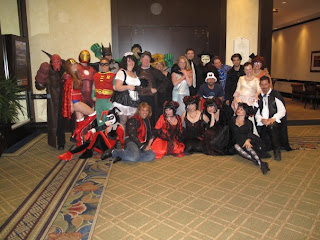 Of course a feature of RT I really love and am thrilled to be able to participate in is Heather Graham’s Vampire Dinner Theater, an original musical review written by Heather and featuring the Slush Pile Players, a group of authors with with professional backgrounds in music and theater, and always featuring several of Heather’s charming and multitalented offspring. Last year the show was Blood Sucking Vampires; starring F. Paul Wilson as Van Helsing, leading a bevy of comic superheroes against Heather Graham’s evil but party-loving vampires from New Orleans. This year - well, I would tell you but Heather would kill me.

I also have to say, when women organize these things everything is just – prettier. The attention to detail is mindblowing. Promo Alley, where authors put out their postcards and bookmarks and giveaways, is a long aisle of covered tables on both sides, and instead of having people just throw their swag on the tables, all the giveaways have to be in displays or decorated baskets. Yes, that takes an extra hour of prep time, but oh man, is it worth it. You can actually SEE the promo stuff, and you get a feel for each author from the decorations of the boxes and baskets. Brilliant idea.

If this is all sounding a little estrogen-heavy, you’re right. But remember – women buy books. And male authors are catching on to the gold mine of readers to be - mined - at RT and are coming over to the decadent side. Now that they’ve figured it out, I doubt Paul Wilson or Barry Eisler or Joe Konrath or Rob Gregory Browne will ever miss an RT again. I expect that more and more men (like Joe Finder and Brett Battles, this year) are going to be realizing what an advantage that Y chromosome gives them in a situation like this.

- Alex
Posted by Alexandra Sokoloff at 4:15 AM

holy hell, that convention sounds AWESOME!
i've never been to a convention before...

One of the best things about RT for me is that at numerous conventions I have met the most awesome people and become friends. People like you and Harley, Joe and Paul. Who knew acting in Heather's show had such great personal rewards?

Back story please on your book w/ref to Rhine Institute? Most people don't even know it exists or its reason for being. If you're in Raleigh are you familiar with Dancing Moon?

That's a great explanation of the events, Alexandra. Don't tell too many people or it may blow up like the comic-cons have!

Did you enjoy yourself this year? I was one of the (mostly clothed) Mr. Romance competitors.

Oh no! Now I've got another con to add to my must-hit list! I hope you have as much fun this year as last year. :)

I love RT. It is everything you've said, Alex. The readers who attend are outrageous and simply marvelous. I've made some fabulous friends there. I am so glad you had fun this year.

Because of your "secret favorite convention" admission, and because Fabio was a special guest at my first RT convention, I must share the following.

Last week on the blog Smart Bitches Trashy Books, Elise Logan of the blog Scorched Sheets revealed a life-long adoration of Fabio. Elise called this "her secret shame." Commenters hurried to Fabio's (and Elise's) defense, much like we hurry to the RT convention's defense when speaking to writers outside the romance industry. But Fabio, it turns out, has long been both a genuinely charming person and an astute man of business.

As you say, romance readers love authors and they love books. Give me that reader any time, indeed!

no need for me to say: ENJOY YOURSELF! but will, anyway ;) lol