Nanowrimo Day 1: Your First Draft is Always Going to Suck 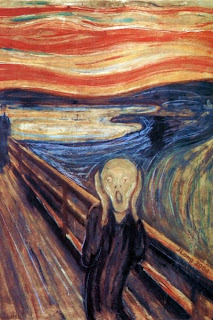 Today's the day! I bet a lot of you are already writing.

So now all that prep gets thrown away and you simply start and keep going. And so I thought I'd post on just that, today.

It’s an interesting thing about blogging – it’s made us able to get a glimpse of hundreds of people’s lives on a moment-by-moment basis. I don’t have a lot of time (well, more to the point, I have no time at all) to read other blogs; I can barely keep up with posting to Murderati and my own blog. But I do click through on people’s signature lines sometimes to see what they’re up to; it’s an extension of my natural writerly voyeurism.

And a certain pattern has emerged with the not-yet-published writers I spy on.

It goes something like this: “My current WIP is stalled, so I’ve been working on a short story.” “I’ve gotten nothing done on my WIP this week.” “I have reached the halfway point and have no idea where to go from here.” “I had a great idea for a new book this week and I’ve been wondering if I should just give up on my WIP and start on this far superior idea.”

Do you start to see what I’m seeing? People are getting about midway through a book, and then lose interest, or have no idea where to go from where they currently are, or realize that a different idea is superior to what they’re working on and panic that they’re wasting their time with the project they’re working on, and hysteria ensues.

So I wanted to take today’s blog to say this, because it really can’t be said often enough.

I’ve been a professional writer for almost all of my adult life and I’ve never written anything that I didn’t hit the wall on, at one point or another. There is always a day, week, month, when I will lose all interest in the project I’m working on. I will realize it was insanity to think that I could ever write the fucking thing to begin with, or that anyone in their right mind would ever be interested in it, much less pay me for it. I will be sure that I would rather clean houses (not my own house, you understand, but other people’s) than ever have to look at the story again.

And that stage can last for a good long time. Even to the end of the book, and beyond, for months, in which I will torture my significant other for week after week with my daily rants about how I will never be able to make the thing make any sense at all and will simply have to give back the advance money.

And I am not the only one. Not by a long shot. It’s an occupational hazard that MOST of the people I know are writers, and I would say, based on anecdotal evidence, that this is by far the majority experience - even though there are a few people (or so they say) who revise as they’re going along and when they type “The End” they actually mean it. Hah. I have no idea what that could possibly feel like.

Even though you will inevitably end up writing on projects that SHOULD be abandoned, you cannot afford to abandon ANY project. You must finish what you start, no matter how you feel about it. If that project never goes anywhere, that’s tough, I feel your pain. But it happens to all of us. You do not know if you are going to be able to pull it off or not. The only way you will ever be able to pull it off is to get in the unwavering, completely non-negotiable habit of JUST DOING IT.

Your only hope is to keep going. Sit your ass down in the chair and keep cranking out your non-negotiable minimum number of daily pages, or words, in order, until you get to the end.

This is the way writing gets done.

Some of those pages will be decent, some of them will be unendurable. All of them will be fixable, even if fixing them means throwing them away. But you must get to the end, even if what you’re writing seems to make no sense of all.

You have to finish.

I’ve had a couple of weeks in which my page marker has not moved past the number 198 because I keep deleting. Nothing I write makes any sense. I don’t have enough characters, I’m not giving the characters I have enough time in these scenes, I have no conception of yacht terminology and am spending hours of my days researching only to find I’m more confused about how things work on a boat than when I started.

It always happens. I’m not special.

At some point you will come to hate what you're writing. That's normal. That pretty much describes the process of writing. It never gets better. But you MUST get over this and FINISH. Get to the end, and everything gets better from there, I promise. You will learn how to write in layers, and not care so much that your first draft sucks. Everyone's first draft sucks. It's what you do from there that counts.

That is not to say you can't set aside a special notebook and take 15 minutes a day AFTER you've done your minimum pages on the main project, and brainstorm on that other one. I'm a big fan of multitasking.

But working on that project is your reward for keeping moving on your main project.

Finish what you start. It’s your only hope.

And may the Force be with you, today and all month.

All the information on this blog and more, including full story structure breakdowns of various movies, is available in my Screenwriting Tricks for Authors workbooks.  e format, just $3.99 and $2.99; print 13.99.

Posted by Alexandra Sokoloff at 4:19 AM

Allowing yourself to suck and keep going anyway is one of the many things you will learn throughout Nanowrimo. Nanowrimo isn't about writing a piece that can go straight off to the publisher. It's about writing, and connecting with others who write. Throughout, you'll write a lot of crap, but also some really beautiful stuff. You can delete the crap in December and see what you're left with. But until then, just write!

(I wrote down my survival tips for Nanowrimo on my blog, just thought I'd mention in case you have a moment or two to spare.)

I'm not joining everyone in Nanwrimo, only because I'm already 12,000 words into the book I'm supposed to be finishing because it's the second in a series, so I really don't want to start anything else right now. And even tho I give myself permission to suck, it does get harder every day to feel like you're producing the equivalent of syllabic barf. ("Blah, blah, blah, who would read this crap?")

I'd love to talk more, but I feel the need to get some more writing done.

Alex, I'm sure someone has asked you before, but have you ever thought of compiling all of these into a how to book? Just curious.

It's very freeing. I don't know any better way to shut off that inner critic.

Gayle, you're allowed to cheat, you know. ;)

Do it with the book you're writing.

Becky, yes, I did it, there is a book. I'm just waiting for a few more formatting things to get done and it will be on Kindle, probably next week.

And for people who don't have Kindle, Kindle books will be available for PC starting this month.

I'll announce it when it's available.

Great post, Alexandra. This is a message that we writers need to hear over and over. Stephen King hit on a similar theme in his book, On Writing. If we always listened to our inner editors, we'd never get anything done!

Reminds me of "If you haven't written today, you're not a writer."

"What about the deal-e-o?"
Uncle Rico, Napoleon Dynamite.

"If you haven't written today, you're not a writer."

I'd never heard that, Gene, thanks. Yeah, that pretty much says it.

I thought about leaving a comment, but then I decided to get back to writing. And whoever said "If you haven't written today, you're not a writer," probably has hard drive full of meaningless drivel.

I thought about posting a comment, but I figured I should get back to writing. But I will say that whoever said "If you haven't written today, you're not a writer." probably has written lots of stuff that no one wants to read.

Bravo! For WIPs, people can always become a NaNoRebel: http://www.nanowrimo.org/eng/node/3303456.

(P.S. Sorry about the double comment; had a bit of technical trouble.)

Anonymous said...
This comment has been removed by a blog administrator.
1:43 PM

I finished a screenplay on a severe deadline and changed the protagonist at the start of the third act. It was the story that I wanted to tell and I figured it would go through rewrites anyway.

A producer and reader recently read it and complained about on thing. Was it the protagonist or the fact that the protagonist changed? Heck, no! It was the best scene of the whole script and how it might be seen as culturally insensitive (it's a period piece set in Michigan in the 1820's).

But they want to see two of my other scripts that are both half finished. So maybe those first drafts aren't as bad as I tell myself. I really am starting understand why writers drink and sometimes I wish I was even semi competent at consuming alcohol.

I've hit the Wall on my current WIP. I know it. I've been there too many times to count.

But you're right. Push on through, damn it.

Alexandra,
I happened across your site via Suzannah over at Write It Sideways, and I love it!
I particularly love this post and I read it exactly in time.
I'm participating in NaNoWriMo for lots of reasons which I won't bore you to list here. (ha!)
Suffice it say, thank you for what you said here and thank you for your blog.
I love it! I'll be back and I've just subscribed to your RSS feed. I can't wait to read more.
Warmly,
Lori

i had good intentions this year, but too many happenings in rl have me 12 days behind already :(

of course, my other writings continue... ad nauseum :O lol

As someone who just finished the first draft of a novel, I really appreciated this post. As I start the process of revision, I've come to realize that my baby isn't quite as perfect as it seemed at first. But reading your post made me feel better about the road ahead. Thanks!

Hey Jason, CONGRATULATIONS on finishing that draft! IMO, the only thing a first draft needs to be is done.

If you haven't found this post, yet, it may help: