ITW Thrlller Award nomination for "The Edge of Seventeen" 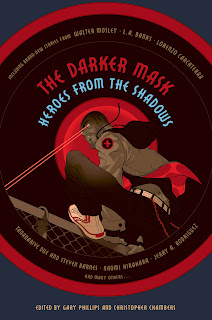 Lovely surprise yesterday - my story (my very FIRST short story!) "The Edge of Seventeen", from THE DARKER MASK anthology, was nominated for the ITW's Thriller award for Best Short Story.

I love that piece and am touched to have it recognized... besides which, how can I argue with being in the company of such brilliant, gorgeous and talented men as Ken Bruen, Jason Pinter, Tom Piccirilli, and John C. Boland?

Not to mention the book nominees and special awards honorees, wow...

The 2009 ThrillerMaster, honoring an influential body of work, goes to David Morrell.

Recipients will be recognized and winners announced in New York at ThrillerFest 2009 which will take place at the Grand Hyatt, July 8-11. The banquet, where the awards will be presented, is Saturday July 11. For more information, registration and tickets, visit www.thrillerwriters.org.
Posted by Alexandra Sokoloff at 4:45 AM

Email ThisBlogThis!Share to TwitterShare to FacebookShare to Pinterest
Labels: ITW, THE DARKER MASK, The Edge of Seventeen, Thriller Awards

Congratulations on the nomination Alex. The Edge of Seventeen is a FANTASTIC story.

And I'm also looking forward to The Unseen.

Congrats Alex!
Thank you for sharing your joy. BIG SMILE.
Do you have your outfit picked out for the banquet yet?
Karen:)

Congratulations on the nomination.

I have been reading your previous posts on topics that I have been struggling with, and am pleased to say you have provided both answers and inspiration.

Thank you, thank you.

No, Karen, no outfit picked out yet... I'm still trying to figure out how I'm going to be at ALA and Thrillerfest simultaneously.

Barbara, so glad you're getting answers and being inspired. That's what we want to hear.

Kaye Barley, I miss you! I need to come visit and torture you.