And the Oscar goes to... 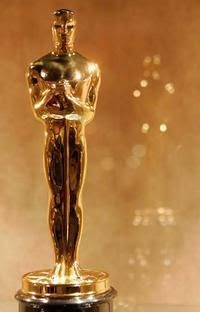 I don't do memes. I apologize to those of you who have tagged me for them - it's nothing personal. I just can't. I mean, honestly, the whole reason I started writing story structure articles to begin with was that I just don't have anything more to say about myself.

But if I HAD participated in the meme that was or maybe still is going around, “Twenty-Five Things About Me”, this would have been one of them:

I don’t gamble, hate cards, don’t buy lottery tickets, am bored senseless in casinos… but over the years I have won thousands of dollars on casual Oscar pools, and have made other friends who took my picks a few hundred here and there, too. And let me be clear - the vast majority of these Oscar pools that I've won have been at parties IN HOLLYWOOD, where I was betting against other screenwriters, directors, actors, agents, DPs, editors, production designers - many of whom were arguably more clued in than I was.

I actually won my first Oscar Derby when I was sixteen years old and entered a contest in the local paper. I think that’s young enough to count as evidence of a genetic predisposition.

Or maybe it was just foreshadowing.

So I was going to post another story structure article today, on Character Introductions, but hell, it’s Oscar day, and why should we be exempt, here? I bet you all want to dish. And myself, I’m curious if this talent I have was mostly a product of living in Southern California and just having it all in the air. This year I am NOT in California and in fact just got back from out of the country, so I don’t feel at all plugged in. In other words, no promises!

All that disclaimed, let’s take a look, here. And here’s a link to a printable Oscar ballot, for your own purposes and so that I don’t have to list all the nominees, myself.

Best Picture. I’m not going out on a limb to say that SLUMDOG MILLIONAIRE is a juggernaut. But if you’ll remember, I raved about it the second I saw it.

Best Original Screenplay: Dustin Lance Black for MILK. And anyone who hasn’t seen this one - what are you waiting for? Bio pics are about the hardest genre of all to pull off, and this one lets you live this history AND a wrenching, uplifting story at the same time.

Best Adapted Screenplay: Simon Beaufoy for SLUMDOG. I understand perfectly why Indians would take offense at the character changes he made to Vikas Swarup’s novel. This is a quintessentially Hollywood film, stereotypes and all. But as Hollywood films go, it’s magic.

Best Actress: Kate Winslet. Haven’t seen THE READER yet – hoping to catch it this afternoon. Didn’t particularly care for her performance in REVOLUTIONARY ROAD (and the film - not recommended!!) No matter what she does in READER, and no matter how much I love her, and I truly do, I cannot in my wildest imagining believe that she even comes close to Meryl Streep’s literally breathtaking performance in DOUBT. But if you’re voting to win, that’s the buzz. (I heard someone put it perfectly, in Hollywood terms: “The movie’s about the Holocaust. How can she lose?”)

Best Actor: Here’s the real race. If I were voting my heart, Sean Penn, hands down. He didn’t play Harvey Milk – he became Harvey Milk. I completely forgot that was Sean Penn up there. But Mickey Rourke was heartbreaking in THE WRESTLER, and Hollywood loves a comeback. And Frank Langella was truly mesmerizing in FROST/NIXON, and as another prognosticator put it, Rourke and Penn have the same fan base so they might split the vote and give Langella the edge (these are the things you REALLY have to consider when you’re handicapping the Oscars). Every one of these men deserves an Oscar for his performance. I say Penn, but my guess is as good as yours, here.

Best Supporting Actress: Here’s a rule of thumb for voting this category: “Youngest, cutest.” Sad, but true. The race is between Viola Davis and Penelope Cruz. Both stellar, Oscar-worthy performances in polar opposite roles. I hear people saying, “Viola might get it because of Obama.” This is the kind of talk you hear for months around Hollywood, really, it’s fascinating. I’d love to see Viola, but Penelope was better than I’ve ever seen her (and I’m not really a fan) in VICKI CHRISTINA BARCELONA. I say Penelope gets it.

Best Supporting Actor: And this is no race at all. Heath Ledger, and it’s really just too sad.

Now, if you’re going for the whole ballot, there are a couple of other good bets I can give you.

SLUMDOG will probably sweep, so you can’t go too far wrong just marking it down for all the tech categories, sound, editing, effects, it’s nominated for. It won’t WIN in all of them, probably, but if you’re playing to win, it’s still your best bet.

Best Editing: almost always wins along with director. Chris Dickens for SLUMDOG, in case you were thinking of voting for something else.

Cinematography: This is the one that I think has a chance of going elsewhere. This might be the one big award that BENJAMIN BUTTON gets. But that’s a lot about my personal taste.

Best Song: I’d go for the one from WALL-E, but haven’t heard it.

Art Direction, Makeup, Visual Effects – SLUMDOG’S out of the running for all of these and it’s going to be a battle between BENJAMIN BUTTON and THE DARK KNIGHT. As a matter of fact I’m most curious about these production awards. I found BUTTON a very unsatisfying movie but the look of it was just stupefyingly lovely, and I’d like to see it rewarded for that. There’s sort of a backlash against the film, though, a lot of grumbling, and a lot of Hollywood talkers think THE DARK KNIGHT hasn’t been recognized enough.

Documentary feature, short feature, animated short: the handicapping rule of thumb here is – Is there a Holocaust movie? Vote for that one. This year I know nothing about any of them but I have heard people rave about MAN ON WIRE, for whatever that’s worth.

Best Foreign Film: on this one I would take the advice of legendary Putnam editor Neil Nyren: "A great contest between two truly stellar movies, WALTZ WITH BASHIR and THE CLASS. BASHIR has the edge, I think, because it's so innovative and portrays a superheated political question with great humanism, but THE CLASS is the most exciting movie about, of all things, a Parisian middle school classroom that you'll ever see. Push comes to shove, the money's on BASHIR."

So there you go. Not all-inclusive, but if you don’t generally have luck at these Oscar pools, it might help you. Or - not. That's why they call it gambling.

Me, I actually have other plans tonight, so I’ll be speeding through the show on DVR later. If you’re not at an actual Oscar party, and drinking heavily, it’s the only way to get through it. ;)

I do have to say that I’m grateful for some truly exceptional films and performances this year. I can’t remember when I was last excited about so many films in a single year – DOUBT, SLUMDOG, MILK, FROST/NIXON, THE VISITOR, THE WRESTLER, GRAN TORINO (but I definitely don’t want to get into THAT debate right now!).

If you haven’t seen some of these, do yourself a favor and go. Sometimes Hollywood just gets it right.

Okay, people – let’s hear it. Your favorite films? Writing? Performance? Production design? Who should win, and who do you think WILL win?

Are there any other Oscar pool pros out there?

And tomorrow, we can talk about the clothes.

- Alex
Posted by Alexandra Sokoloff at 3:12 AM

Whew! Don't think I'd win any money from you on the Oscars! I think you're right ... we'll see tonight.

Just watched the show. Wow, girl, you totally rule. I'd never bet against you.

And how much do you charge producers to make their movies Oscar-ready? :)

I wouldn't bet against you in an Oscar pool, that's for sure! You could probably head down to Atlantic City just prior to the Oscars and really clean up if you wanted....

Loved the Valentino gowns. How does he always get it right?

Yeah, not too bad this year! I changed my ballot in a few categories at the last minute and picked up a few more points - then again, I lost a few, too.

And if I'd really been thinking, OF COURSE "Jai Ho!" would have been Best Song! But hindsight is 20/20.

It doesn't work every year, of course - still, more often than not.