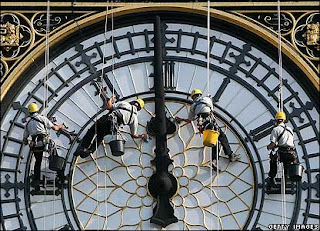 So here we all are in that lost week between Christmas and New Year's - the week I think of as "The Crack" (no, nothing dirty or illegal,the term is from the Mary Poppins books actually, and bonus points for anyone who gets the allusion).


Do you all do New Year's Resolutions? I used to, but I don't remember having done them the last few years. If I didn't, I imagine it was because I was lost in the new author vortex. It's hard to take a breath and step back and look at the whole next year if all you can think of is the approaching deadline, or if you're on tour, or if you're waiting to hear back on a proposal.

This end-of-the-year isn't any less harried for me than the last few, but it feels like it is for some reason, and I think that reason might be that I have a better sense of the shape of next year than I have had the last two years.

Part of this is that after two or three, depending on when you want to start counting) years now as an author, I have a better idea of how long things take. Yeah, I have galleys to correct by the 6th (Grrrrr.... that's not what I call a Merry Christmas present....), but I've done them before and I know I'll get them done. Yes, the sudden arrival of the galleys threw a wrench into my resolve to get to the end of my second draft of the book I'm writing in my spare time by New Year's Eve, and I'm pissed about it, but I think I'm going to make it anyway, if I divide my day carefully.

So instead of doing a list of resolutions, I'm finding myself looking at the overall shape of my work year in 2009 - something I've never really done or even been able to do before. Being self-employed - and I have been for pretty much my whole adult life - makes your work life maybe a little too spontaneous and improvisational, but lo and behold, the business side next year really does structure itself out in amazingly clear way.

In the first quarter of 2009 I will finish this secret other book (shhh), and keep churning out the first draft of my Bahamas book (my fourth for St. Martin's.) Michael and I will go to the Bahamas for research - and vacation! - courtesy of my MIL, yay!!! When I finish the secret book I will continue working on the Bahamas book and start on the outline for my paranormal for Harlequin Nocturne.

I also have a novella in an anthology that we'll be taking out in the beginning of the new year.

I have conferences I am going to in the first quarter of 2009 but not too many, and they're easy travel, like the South Carolina Book Festival, and I'm being paid to go to all of them, at least expenses, so that's huge progress.

In the second quarter of 2009 we will start moving into our new (renovated) house, but it's not the same kind of stress as moving moving because we don't have to SWITCH houses, and there's no deadline involved - we just have to get ourselves gradually over to the other one, and it's walking distance. That will be a great burst of energy in the spring, to start in a beautiful new home. Michael just finished the back deck this last week which I know we're going to live on, so I'm looking forward to that new office...

THE UNSEEN comes out at the end of May, by which time I'll be finished with and have turned in both the outline for the paranormal and the Bahamas book, so I can put a good concentrated month or two into touring and conferences just as the season picks up. I'll be hitting some big ones: BEA, RWA National, Thrillerfest, the Horror Writers Association Stoker weekend, ALA.

I''ll also be teaching a lot of workshops on story structure and screenwriting techniques for authors at these cons, so I'll be growing that book on the side.

After that flurry of touring, end of Junish, we're into third quarter of 2009, and I will be ready to power through on the paranormal book, due in October, and also I'll start outlining my seventh novel. Yes, I said seventh. Astonishing!

And realistically I bet I will have started that one way before June.

Of course I'll be doing revisions on the Bahamas book throughout the summer, too.

It doesn't seem possible, but if I work just a few pages at a time throughout the year, I am pretty sure I will also have my story structure book done by fall, if not before. Also in the fall the UK versions of my books start coming out, so maybe by then a nice promotional trip to England or Australia will be in order - it's something to keep in mind.

And with all that laid out so nicely, I don't think I have to plan the fourth quarter of 2009 too extensively - whatever has happened during the first half of the year will shape the second half of it.

Looking at that 2009 overview, it's clear to me why I'm feeling less than frantic at the end of this year, even though of course the writers' life is always full of stressors, some self-created, some real.

Life is always a huge variable, but the shape of my work year is solid and I can look at it and both think - "Yeah, I can handle all that," and "Wow, what a fantastic life I have!" It's my perfect combination of factors - a strong structure with lots of fun variations and improvisations within it.

But within that grand plan, I guess I also have a few resolutions.

- Dance more.
- Meditate every day. Well, most days.
- Declutter. Everything.
- Swing classes with Michael so that we can go out dancing together.
- Start a collage book of decorating ideas for the new house.
- Keep in better touch with friends and spend a lot of time with family.

Not that many, but doable. I'm hoping to get more ideas from YOU all, because of course my questions for today are - Do you ever do a year plan or overview? If so, what's yours?

And/or - what are your resolutions?

Wishing everyone an awesome New Year's Eve and Year!

- Alex
Posted by Alexandra Sokoloff at 3:32 AM

I always have so many things on my list of Things To Do, the years kind of bleed from one to the next. It might depress me to take stock of last year and see how much is left to do this year (e.g. a spare room that needs serious decluttering).

In my youth, I was very serious about my New Year's resolutions. Failure to meet any one of them used to devastate me. Then I began making resolutions I knew I could keep, like resolving never to sit through RoboCop again. This year I will be debuting my very first novel ever and I don't know what all of the marketing and publicity will entail and I'm excited and nervous and I know I've got to get the next one written in the midst of it all and... well, you get the picture. I think at this point I should resolve to do what I know I WILL do: alternate between utilizing my vast creativity and organizational skills to sell my book and sitting in a corner, rocking and mumbling.

Oh, yeah, and I have to plan my son's choir's dinner theater, and clean out that spare room.

A few years ago, I made a resolution not to make anymore resolutions. So far, so good. Come February, I can't remember what they are anyway. ;-)

There is a secret project I'm working on for 2009, so I'm crossing my fingers that it pans out. Besides, I'm sinking a lot of money into it, which is why my conference season is very limited this year. It will mean some huge changes, but I've never been more certain of something in my entire life.

With that being said, I did a lot of planning and forcasting into 2009. Despite everything we've been through this year with the economy taking a dump, I'm staying upbeat because that's how I've always lived life.

Oh, yike, the spare room. I forgot about that one. See, I knew I'd be able to fill out my resolutions list if I saw what you all are doing.

" alternate between utilizing my vast creativity and organizational skills to sell my book and sitting in a corner, rocking and mumbling. "

Gayle, that pretty perfectly sums up the experience of first two years of being published. My New Year's wish for you is that you can get that part over with in just one. ;)

Marcia, you are such a tease! VERY intriguing.

I say go for it. You've got great instincts and I expect you to break out any second now. And when you commit to something the way you obviously are, all kinds of doors fly open.

VERY Happy New Year to you, too, and best of luck with - the thing!

I have been plugging away on my manuscript. My New Year's resolution is to acquire an agent/have my work published. My life's passion is to create my own characters and watch them leap from the pages.

My first work takes place in the time of yore. My hero accidentally slays my heroine's father by protecting his own father. Bound by honor he becomes her protector by marriage. Will they overcome their past and forge a world together? Guilt is a mighty force. Read on and enjoy!

Alex, I would really like to know your input. It is greatly appreciated.

One of your biggest fans,

Mary, I think that's a solid romance premise, well-told, but you should definitely let us know what time period and country this is set in. That gives us an enormous amount of information that right now is missing from your pitch.

Also, be careful of using phrases like "Read on and enjoy!" in a query or pitch. Agents and editors don't like cutesy admonitions. It's always better to say something like. - "I appreciate your time."

Very Happy New Year to you, too!