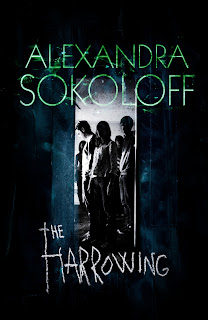 I got my UK book jacket art for THE HARROWING this week and had to share:

I LOVE this! I really think UK covers are so much grittier and visceral than American covers. I love the door, I love the edgy isolation of the kids, I love the formless (and not so formless) energies around the door. I even love the way the O's of my name line up the way they do at the top of the door - it looks somehow mystical in a way that really works with the story.

Getting cover art is one of the most nerve-wracking and most exciting stages of the whole novel thing. No matter what you've been thinking your cover will look like, it will be different and totally unexpected. This is my fifth set of cover art on THE HARROWING and I thought I would post all the covers so that I can look at them all at once sometimes, and so can anyone else who cares to can, too.

This was the first, original St. Martin's cover.

I loved this cover and got huge positive reaction to it. I think it's spooky and arty and poignant, all at once. And the girl looks just like I always thought the main character, Robin looked. But that art never made it onto the final book although a set of ARCs was printed with it, which will obviously be worth a fortune in the not-too-distant future.. ;)

But Barnes & Noble didn't like it, and so it was changed. Bet a lot of you didn't know that could happen, did you? Yes, it does. 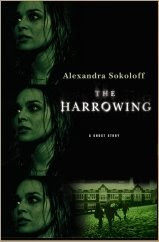 So this was the official hardcover jacket:

Now that girl - was startling for me to see the first time, because she is a dead ringer for the character Lisa in the book. Yes, and a young Angelina Jolie, too.

I like some of this cover better - I think that shot of the school and the kids and the sense that something invisible is swooping up behind them is pretty great (and I love what my webmistress did with the cover images in the little flash trailer on my website. I think the school looks more like an American college than the first one, above, which is wonderfully Gothic. Men seem to like this cover better than the first one, too, in my unscientific gender-based polling on the subject. They say the girl looks like she needs rescuing.

I've also heard - from men - that the girl looks like me. That I don't see. (Does that mean I look like I need rescuing?)

This is the German version. Talk about Gothic! Very European.

And this is the French cover. If you're thinking it looks a lot younger than the others, you're right: LE CERCLE MEURTRIER is sold in France as a YA. 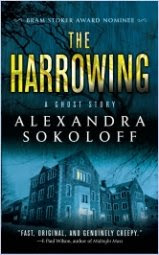 And then of course this is the U.S. paperback cover, which I think is a great haunted house look.

There's something wonderfully REAL about cover art. So much of a book is such an abstract process - and then suddenly you get rewarded with a concrete image that pulls everything together. It gives you a thrill that lasts for weeks.

I just got cover art for THE UNSEEN, too, and I'll post that one as soon as I get the word that it's final. It was NOTHING like I thought it was going to be, but I love it - I think it's as good as the one SMP's Adam Auerbach did for THE PRICE, which I think is perfect. I know I'm lucky - left to their own devices, St. Martin's really does fabulous covers.
Posted by Alexandra Sokoloff at 4:44 AM

Thanks for posting those covers, Alex. They all seem to have their own unique quality about them. I have to say though, that UK cover is probably my favorite. I agree that UK covers do in fact seem edgier and grittier than their American counter parts.

And I think it's pretty bad when a book store has enough clout that they can actually get the publisher to change the cover because they didn't like it. Sheesh. You'd never see an independent (which I fully support :) ) doing that.

What I really like about the UK cover for The Harrowing is the way your name looks so proper and sane, while the book's title looks so - not. It makes me think that here is a good and benevolent author, in charge of all the chaos between the covers.

I guess the UK cover wins!

I like those covers Alex, particularly the UK one. I also agree with R.J. that it's pretty shocking that B&N has not only had the clout but audacity to make a publisher change a cover because they happen not to like it.

Samantha said...
This comment has been removed by the author.
2:22 PM

I personally like that haunted house cover for the book.

By the way, I started reading your posts about the craft of writing. I've even been compiling them in a notebook. Have you ever thought about turning it into a book? I think it would sell real well.

Dave, it's not just B&N - Walmart also can and does demand that covers be changed if they don't like them.

But I can't get too worked up about it (even though I did love the cover they changed.

Unlike Hollywood, they're not changing anything IN the book. Believe me, I'd much rather live with the cover change!

Thanks, Sam, I'm so glad to hear the articles are working for you.

Yes, I think I'm going to have to write the book by now. Too many people are asking, and my own OCD is kicking in.

About covers - I actually heard two authors talk about having to change their manuscripts to match the cover art! One was a romance - the author's characters were twins with "breathtaking" red hair, but the cover artist painted them as blondes. The other was a mystery - the body is found in a dog house, with the head sticking out of the door. Cover art had the feet sticking out. Yes, they had to re-write to match.

Which was why I was so worried about my cover. Turned out okay, though.

Gayle, I still think changing hair color or the position of a corpse is a perfectly reasonable thing to ask an author in terms of the overall package. That's such a small point in the grand scheme of things!

When in Hollywood you can start write a script that's a an epic historical and end up with a gross-out comedy. And then get fired off your own project so some other screenwriter can turn it into a cop movie.

Alex,
I love the US paperback, it has a little of the "big book" feel to it. I think it would have made a cool Hardcover jacket, too.

However, I LOVE the UK cover. Very edgy with a touch of iconic. I bet it'll sell like hotcakes when people pick up the book and start to thumb through and really read it. Awesome of you to post this for us, thanks!

I wonder, if changing the covers is liken to taking food back to Chef? Horror horrors, and then, acceptance of what must be.

Wow, you can get fired off your own script? Geez, I never realized how harsh Hollywood can be. I think I'll stick to writing short stories and novels.

Ms. Bitch, really, I don't stress about it. I can't pretend to know as much about marketing as my publishers do. I think there are some areas that you just have to trust your team to know what they're doing, and this is one of them.

Thanks, Jake! Yeah, it's a keeper.

RJ, you must have missed this post on The Dirty Little Secret: